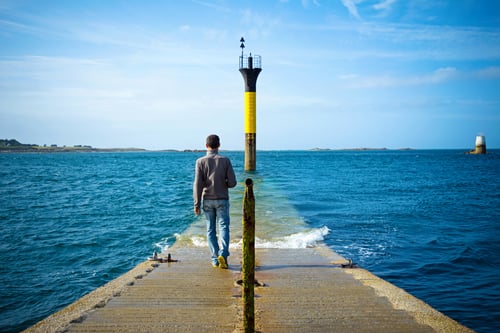 A new research study released on Tuesday February 5th – France’s national suicide prevention day- has shed light on a mental health issue that still remains a taboo for many.

The country’s public health body released its latest suicide figures (from 2015), indicating that almost 9,000 people took their own lives in that year – although the real figure is likely higher.

In western Europe only Belgium and Finland have higher suicide rates than France.

Although there isn’t a obvious gulf between the north and south in terms of suicide rates, four regions in the north and northwestern region were well above the national average (15.8 per 1,000 inhabitants).

By contrast Ile-de-France where the French capital lies had the lowest rate of suicide in metropolitan France with 7.6 suicides per 100,000 inhabitants, half the national average.

“If we consider all data (actual suicides, attempted suicides/hospitalisations and suicidal thoughts), the Hauts-de-France region has the worst results,” Santé Publique reported.

“The regions where this total proportion is the lowest are Île-de-France (6.2 percent) and Auvergne-Rhône-Alpes (5.9 percent).

Santé Publique’s study also found that 7.2 percent of French adults aged 18 to 75 have attempted suicide in their lifetime and that 4 in every 1,000 have done so in the previous 12 months.

The most common factors associated with suicidal behavior are “difficult financial situations, celibacy, divorce or losing a partner, unemployment and traumatic events”.

High rates of suicide have long been a concern in France especially in certain professions, notably farmers and police who last year were hit by dozens of suicides prompting the government to come up with a prevention plan.

Certain tragic events have brought the problem into the public eye such as the elderly couple who checked into a chic Paris hotel and took their own lives in bed.

Jean-Claude Delgenes, the director of Technologia, a company which works to highlight health concerns for workers and who has long studied the phenomenon of suicide in France, says the government urgently needs to make the issue a priority.

“In France suicide has never been a national public health priority,” he told The Local previously.

“We are a long way behind countries like the UK, who have been working on preventing suicides for 50 years. We had to wait until the 2000s. Today we just don't talk about it enough.