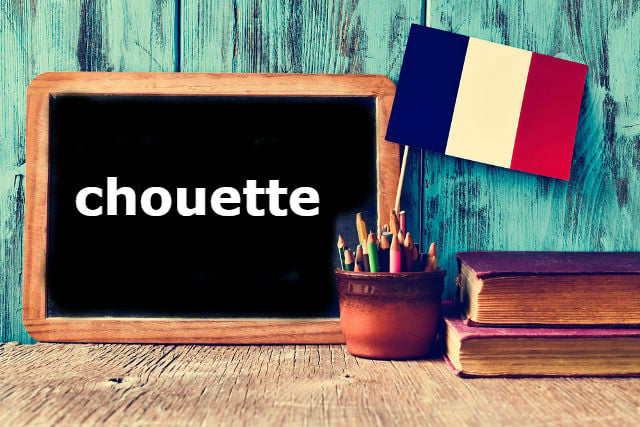 Why do I need to know chouette?

It’s a very useful word you can use to describe something that you like or you think is nice or cool. But it’s also the name for a big-eyed nocturnal bird.

As a noun, chouette is the word for 'owl' in French. There’s la chouette effraie, the barn owl, and la chouette lapone, the great grey owl.

However, you’re much more likely to hear chouette being used in conversation as an adjective to describe something or someone that’s 'great', 'nice' or 'pleasant'.

So on a passé une chouette soirée means 'we had a pleasant evening', and tu portes une choutte chapeau means 'you are wearing a nice hat'.

For a person you might say, il est un chouette garcon (he’s a nice/friendly kid).

Chouette also has a very common usage as an interjection to express satisfaction about something: Chouette! Mon colis est arrivé! (Great! My package has arrived!)

Then there are other expressions that include the word chouette, such as Machin chouette, which you use to refer to someone whose name you can’t remember, in the same way as you 'thingummy' or 'thingamabob' in English.

And perhaps the most pejorative usage of chouette but one that may come in handy occasionally is using it to describe a grumpy old lady or hag, une vieille chouette.

It's also worth noting that chouette is an informal word that you're more likely to use in conversation with friends than in a business meeting.

Chouette is a bit like saying ‘neat’ or ‘swell’ in American English or ‘ace’ in British English.

If you're looking for alternatives you can say c’est super! or cést genial! to describe a situation or outcome you’re happy about.

If you want to describe a chouette person you can call them sympa instead, or for an object joli/e.

Chouette as an expression to celebrate something good does derive from the French word for owl.

It first appeared in France around the Middle Ages, as the now lost verb choeter, which meant to be/act trendy or smart.

French Renaissance writer François Rabelais was among the first people to use it in writing when describing his wife as une belle petite chouette, showcasing how people associated the nocturnal birds of prey with being elegant and clean.