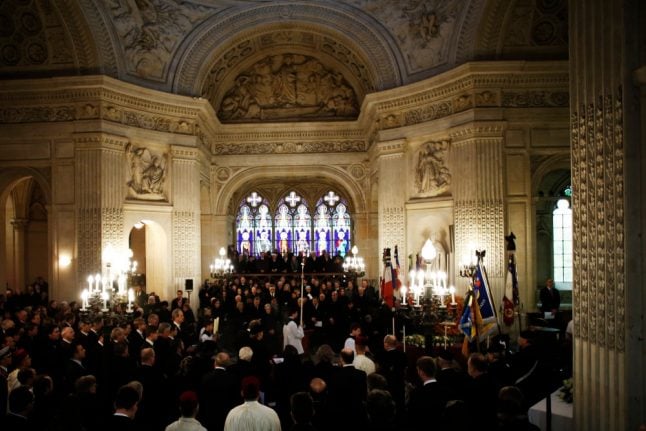 People attend the funeral of Henri d'Orleans at the Saint-Louis Royal Chapel in Dreux. Photo: AFP

The duke of Paris died aged 85 on January 21st — by coincidence, the anniversary of the execution of King Louis XVI during the French Revolution in 1793.

“This is a page in the history of France that is being turned,” Stephane Bern, an expert on European monarchies, told AFP at the funeral at the Chapel of Saint Louis in northern Dreux, the traditional burial place of members of the House of Orleans.

D'Orleans was a descendant of the last king of France, Louis-Philippe I, who reigned during the post-revolutionary restoration period between 1830 and 1848. “The king is dead, long live the king,” tweeted the royalist Action Francaise movement, which advocates a return to a French monarchy under Henri's House of Orleans, after his death.

His son Jean — the new pretender to the throne — had announced his father's death on Facebook.

Since the 19th century two different branches of the French aristocracy have furiously disputed who would take the throne if France ever decided to restore the monarchy.

The Bourbon line of the slain Louis XIV detests the Orleans branch because the duke of Orleans at the time voted in favour of the king's execution.

Born in 1933 in Belgium, d'Orleans spent his childhood in Morocco, Spain and Portugal.

He was allowed to come back and study in France despite a law that banned descendants of the royal houses from France until 1950.

He fought alongside French forces in Algeria's war of independence before taking on a string of other roles in the military and then becoming a banker.

He had five children with German-born aristocrat Marie-Therese de Württemberg before divorcing her in 1984.

His second marriage to divorced aristocrat Micaela Cousino Quinones de Leon — in breach of the customs of the French upper crust — prompted his father to disown him.

He was let back into the fold in 1991 and then confirmed in 1996 as the House of Orleans' official pretender to the throne.

An enthusiastic artist, Henri had staged regular exhibitions of his work since 1972 as well as penning a dozen books.

READ ALSO: Did you know? The tale of the three Frenchmen who still lay claim to the throne