Find out how and why February 2nd can be the most crêpe-themed day of your life in France.

Coins on crêpes, flipping crêpes, and crêpes on top of the wardrobe.

That’s what you can expect to see on Tuesday, February 2nd, 2021 as the French dig out their non-stick frying pans to celebrate La Chandeleur.

I’ve never heard of it before. What exactly is La Chandeleur?

It's a religious holiday in France that’s been around since Roman times that nowadays sees people eat a lot of crêpes, light candles and become very superstitious. 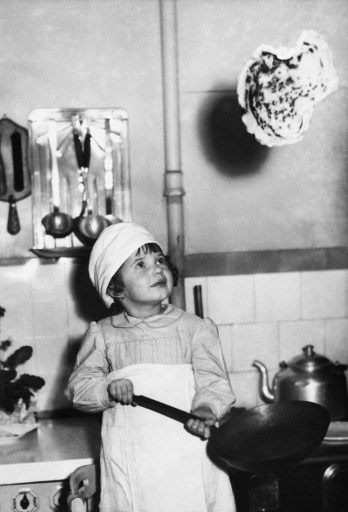 It's said that in the 5th century, Pope Gelasius I started the Festival des Chandelles on this date, a candlelit procession through the streets of Rome that culminated in placing the blessed candles in the churches. Gelasius linked this custom to crêpes by handing out galettes (a type of savoury crêpe) to poor pilgrims who arrived in Rome that day.

And how about the Chandeleur superstitions?

Well, in France’s Franche-Comté region, a proverb says that if someone can carry a Chandeleur candle all the way home from church without it going out, then that person will “certainly stay alive this year”.

A bit of a morbid superstition for a candle, you might think, but you've obviously not heard what the folks down in the Haute-Garonne department thought.

There, they said that if a candle's wax only dripped on one side of the candle during a religious procession, it announced the death of a loved-one during the year.

They also said that “bewitched” people could only be cured by a soothsayer using a blessed altar candle on the day of the Chandeleur.

He would then draw various symbols on the ground, then mix soil from a graveyard with holy water, only to douse the floor with it together with a mix of poppy, fennel, and wild mustard.

Unfortunately soothsaying in a group probably contravenes Covid restrictions so you might want to give that one a miss this year.

I’ll stick to eating crêpes then.

There’s plenty of tradition surrounding the crêpe-making too, so if you want to do it the French way, listen up.

Firstly, it's traditional to have them in the evening. And don't forget the superstitions

It's recommended to toss the crêpe in the pan with your right hand while holding a piece of gold in your left – for good luck of course.

In normal times people often invite friends and family round for crêpes, but the nice thing about this festival is that you can celebrate it in your own home in compliance with Covid rules (which also means you don't have to share your crêpes – bonus).

Are we done with the superstitions?

Afraid not, we haven't mentioned the weather yet – a crucial part of the day.

These three all sound better in French, where they rhyme. Here they are, in the same order: