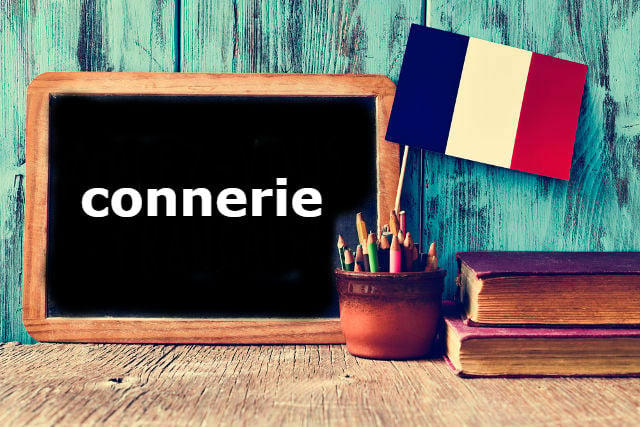 Why do I need to know connerie?

It’s one of those French slang words that you're unlikely to be taught in school but which is used all the time by native speakers, and is extremely handy for expressing disapproval or disbelief at the stupidity of others.

Connerie, which is probably best not used in polite company, has a whole range of equivalent words in English, all of which are negative.

Faire une connerie means to do something bloody stupid or to screw up. Je crois que j’ai fait une connerie can be translated as 'I think I’ve done something stupid'.

If you want to complain about the stupidity of reckless drivers you can sigh wearily and remark on la connerie des chauffards.

Ce sont des conneries! is useful when listening to fools or extremist politicians or other purveyors of untruths: it simply means 'That’s bullshit'.

A naughty child can be reprimanded with the phrase Arrête tes conneries! ('Stop being silly/fooling around', or 'Cut the crap' if you want to be a little harsher).

The plural form conneries has a host of possible and very useful translations. These include 'balderdash', 'rubbish', 'baloney', 'drivel', 'piffle', 'empty talk', 'rot', 'hot air', 'prattle'… We could go on. But you’ve likely got the picture by now.

Instead of saying connerie, you could use bêtise, which means much the same thing but is arguably a little less offensive.

The word derives from the word 'con,' the literal translation of which means a woman’s sexual organs and the English word for which is definitely not safe to be used at work.