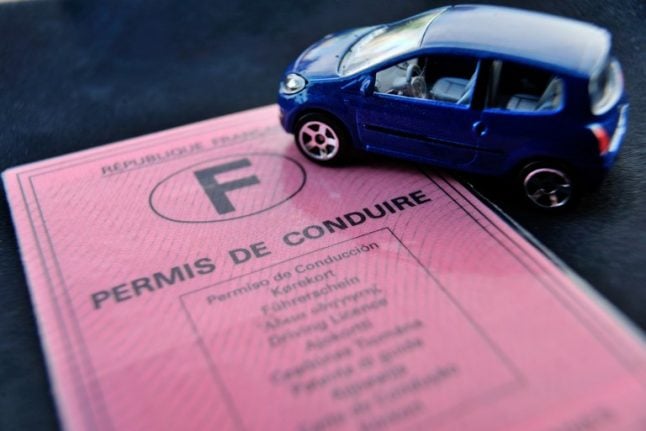 Photo: Philippe Nguyen, AFP
Like everything involving Brexit, there's still a lot of confusion and uncertainty over how it will impact Britons in France with a UK driving licence or even any British person wanting to drive here, especially if there's no deal after March 29th.
Recently, there have been reports from anxious Brits about the long delays to get a French driving licence and even fears of having to sit a new driving test if Britain spirals out of the EU without a deal.
With the Brexit deadline approaching, the French authorities dealing with UK permit exchanges have been flooded with applications, receiving up to 300 requests a day, a government spokesperson told The Local.
Around 4,000 requests from UK nationals are currently being processed, which is why many will have to wait months before they get their new licence. The latest average waiting times are between six and 10 months.
“There has been a rush of applications in the last few weeks because of the lack of any clarity on what's going to happen,” said Aurélie Madelin from CERT, the office in Nantes which deals with the applications.
“And the lack of information regarding what the British authorities intend to do about Brexit means that it is very difficult for us to hand out any advice to these UK nationals,” she added.
With so much uncertainty around, here are some answers to the most pressing questions about driving in France post-Brexit.
What will happen on March 29th if there's no deal?
No one knows exactly what will happen, but the UK government has warned UK nationals living abroad in the EU that a no-deal will mean they won't be able to exchange their driving licences any more without taking another driving test in the country where you live.
On its website, the UK government has advised Britons to exchange their driving licences “as soon as possible to make sure you get one before 29 March 2019.” This warning has been echoed by a number of UK embassies in Europe including Belgium and Italy, but not France so far.
Can UK driving licence holders still swap it for for a French one if they live in France?
Until Brexit happens, nothing changes and Britons who live in France can continue to drive here with a UK licence or swap it for a French one.
If you want to exchange your British licence, you need to be over 18, hold a valid driving licence and have been a resident in France for over 6 months and for at least 185 days per year (or normally resident in France but temporarily abroad for studying, training, an internship or a fixed-term project). See further below for all the details.
It's a fairly straightforward process, but it might take a while especially given the recent rush of applications.
French authorities in Nantes, where most applications have to go through, told The Local the average waiting times were between six and 10 months. However some applicants talk of 12 month waiting times.
Photo: AFP
Can UK nationals still drive in France with a UK driving licence after March 29th if there's a no deal?
To date, there not much news on this topic. The French government said more details on the specific reciprocal 'dispositions' for exchanging driving licences would be released at a later date and it is possible that UK permit holders who reside in France may ultimately have to get a French driving permit.
French authorities in Nantes told The Local that Britons wanting to live in France after a no deal will be able to drive with a UK permit for up to a year, and must apply for an exchange within that time. But encouraged people to not wait until the end of March.
British tourists in France will still be able to drive using a UK driving licence as they can today.

(cont…)”After exit day on 29 March 2019, arrangements for EU licence holders who are visiting or living in the UK would not change.”https://t.co/P3wyxF0niL

READ ALSO:
Exchanging your British driving licence for a French one: What you need to know Will Britons be able to drive in the UK with a French driving licence post-Brexit?
The UK government has said that visitors to the UK and EU residents in the UK will be able to use their French or other EU licences in the UK after Brexit.
Once a UK licence has been swapped for a French one, is it possible to change it for a UK licence once again if the permit holder returns to the UK after Brexit?
French (and other EU) driving licence holders who return to the UK to live will be able to swap it for a UK permit once they go back.
At this time, what documents are needed to swap a UK licence for a French one?
Although rules may change, until further notice the procedure to follow in order to exchange a UK permit for a French one hasn't changed.
Applicants are encouraged to post their documents using “courrier suivi” in other words registered mail where you can follow it. You won't be told your application has been received but you can call the prefecture in Nantes to check they have it ( 02 40 41 20 20).
To be able to change your UK driving licence for a French one, you must:
What do I need to include in my application?
Although you don't need to send you licence off for the initial application you will at some point further down the line. You will receive an “attestation” which can be used to prove you are exchanging the licence. You can use this “attestation” to drive in France for a certain amount of time – normally 8 months.
Where should I send my application?
All applications must be submitted by post.
Applications from Paris must be sent to:
Préfecture de Police de Paris
DPG / SDCLP
Centre de ressources des échanges de permis de conduire étrangers et des permis internationaux de conduite (Crepic)
1 bis rue de Lutèce
75 195 Paris Cedex 04
Applications from outside Paris must be sent to:
CERT EPE
TSA 63527
44035 NANTES CEDEX 01