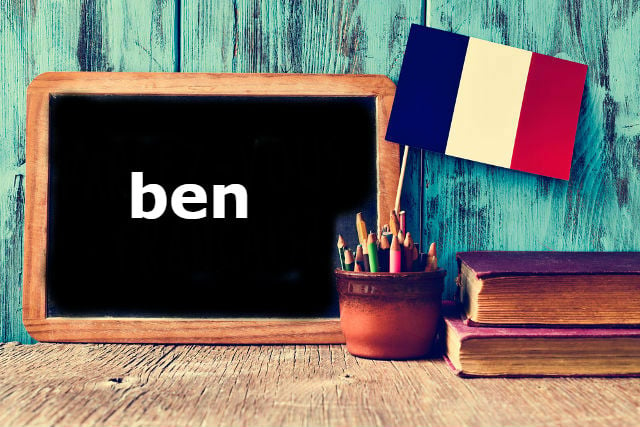 Why do I need to know ben?

This is one of those French words that you're unlikely to be taught in school and it can really throw a spanner into the works when people start using it in informal conversations.

And if your name is 'Ben' then you're even more likely to be confused… particularly when you see it written down.

The main translation for Ben isn't exactly a word.

The equivalent in English would be 'er' as in the noise you make when hesitating or playing for time at the beginning of a sentence.

For example, Et tu sais à quelle heure revient ton frère? – Ben, j'en sais rien. (And do you know what time your brother got home? – Er, I don't know anything).

If you're surprised it can also mean 'well'.

It can also translate to 'of course', such as Et tu vas à l'anniversaire de Pascal samedi? – Ben oui! (And you're coming to Pascal's birthday on Saturday? – Of course!)

It is likely to be particularly confusing to people called 'Ben' when written down because when spoken it actually sounds slightly different to the name.

The vowel is usually slightly dragged out to indicate the hesitation when you're using it to mean 'er' whereas when the French say the name Ben the 'e' is fairly short.