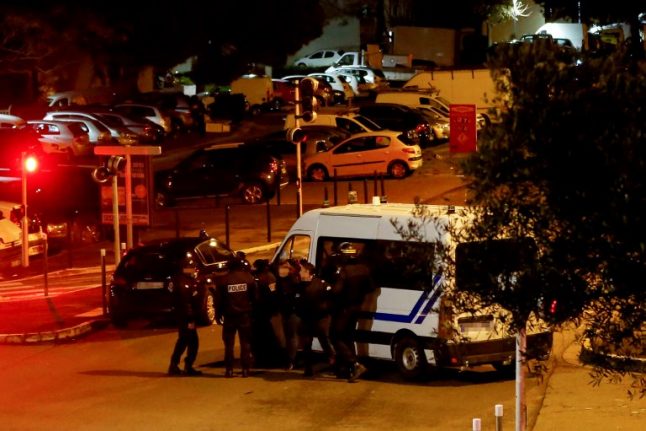 Photos: AFP
French Interior Minister Christophe Castaner said an elite police unit had “intervened” and the body of the shooter had been found after the incident in the Corsican capital Bastia.
“He committed suicide,” the minister told the National Assembly in Paris.
Authorities ruled out terrorism and said a dispute with neighbours over a dog appeared to be the cause.
One police officer was among those injured as the assailant, who had a criminal record, opened fire in the building and on the street mid-afternoon.
The policeman was in intensive care but “his life is not in danger”, Castaner said. Photo: AFP
“In total six people were shot, one of whom has died,” said local prosecutor Caroline Tharot.
The dead man was described as a local public housing official on the French Mediterranean island.
The shooter, Joseph Orsoni, in his sixties, was no stranger to Corsica's courts, having two previous convictions for armed offences, the prosecutor said.
The cause of the rampage seemed to stem from a long-running dispute over Orsoni's dog which had bitten his neighbour's partner, Tharot said.
Orsoni first attacked this 23-year-old male neighbour outside the building with a cutter and then “he went to fetch two double-barrelled shotguns with which he shot several people”, she said.
He began shooting in the street around 4:25 pm, “before retreating into the building where he lives”, a prefecture spokesman told AFP.
The area was sealed off by police, while several residents remained in the building.
“When I arrived at the car park, I heard gunshots,” Pierre Masternak, a public housing office employee, told France Bleu RCFM radio.
“I didn't know where they were coming from, I saw traces of blood on the ground. I called my colleague, the caretaker… He joined me, we looked to see where the traces of blood led and that's when a man burst out behind us, aimed a shotgun at us and fired at us.”
“He got my colleague, who was hit in the leg. We both managed to leave the building and take refuge, my colleague behind a car, and the man continued to shoot at us,” he added.
An elite police unit was deployed from Marseille to reinforce local officers during the operation.