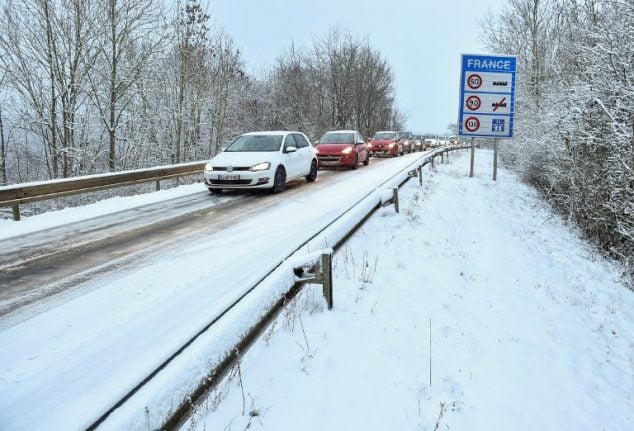 Photo: AFP
Storm Gabriel might have made its way east but it left a certain amount of transport chaos in its wake.
While the greater Paris region of Ile-de-France didn't get as much snow as predicted, with 6-10 cm of snowfall in parts of the region, drivers faced difficult conditions on the roads on Wednesday.
Motorists were advised to be careful when driving, particularly on so-called 'secondary roads' which were more dangerous than the main highways which have been salted.
Meanwhile the RN118, which was closed on Tuesday afternoon due to the high risk of snowfall, is set to remain closed until at least mid-morning on Wednesday.
READ ALSO: The good news is that the main roads were not as busy as they usually are, with fewer traffic jams than usual, due to the fact that motorists were asked to limit their driving as much as possible because of the snow.
Just before 8 am, BFM recorded 50 km of traffic jams compared to the average of around 300 km.
On public transport, there have been disruptions on the RER train network on several lines.
On the RER C, services have been disrupted between Massy-Palaiseau and Versailles-Chantiers and between Bretigny and Dourdan.
On the RER D, services were interrupted between Orry City Coye Forest and Goussainville and on RER E, services were suspended between Plessis-Trevise and Tournan.
There have also been several problems on the Transilien regional train network.
Meanwhile, across the areas of the country hit by Storm Gabriel school transport services were suspended.

School bus services were also cancelled across the whole of the Yonne department in the Bourgogne-Franche-Comté region of France, as well as in the Seine-et-Marne, Essonne, Somme, Ardennes, Aisne and Hauts-de-France departments.
Heavy goods vehicles were banned from the roads in several regions on Wednesday morning while 20 flights had to be canceled after 8 pm on Tuesday from Orly airport in Paris.
A total of six departments, mainly in the north east, had an orange weather warning, the second highest alert, in place on Wednesday morning.
These were Aisne, Ardennes, Aveyron, Haute-Marne, Meuse and Nord.
People in those departments are advised to remain vigilant due to the risk of dangerous weather.