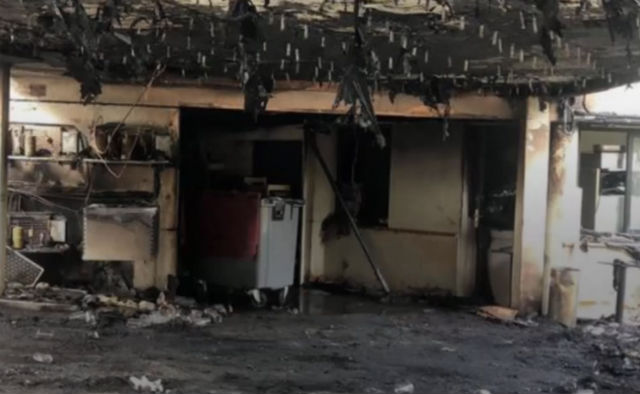 Monday's fire at L'Amphitryon restaurant on the outskirts of Toulouse, in the southwest, came a week after chef Yannick Delpech took to Facebook to denounce troublemakers at the yellow vest protests.

In his post, he attacked the “conspiracy theorists, anarchists and racists sowing trouble in a social movement underpinned by legitimate claims about spending power”.

“No, I will not pull down my (restaurant's metal) shutter!” he wrote, a day after a major “yellow vest” rally in Toulouse — one of the flashpoints in the two-month-old campaign of anti-government protests — which ended with clashes between police and protesters.

A day after the post, L'Amphitryon was burgled and slogans spray-painted on the facade.

Pictures uploaded by Delpech onto Facebook showed slogans such as “collabo”, a term used during World War II against people who collaborated with the Nazis, and “revolution”, a term used by many yellow vests to describe their uprising.

At dawn on Monday the chef's car, which was parked in the courtyard of the restaurant near the kitchens, was set alight, the fire service said.

The fumes spread to part of the restaurant but did not cause major damage, according to the fire service. Delpech's entourage however described the damage to part of the kitchen and cold rooms as “significant”.

The chef himself announced on Facebook that the restaurant, which employs 25 people, had been temporarily closed but said he did not want to point the finger of blame at anyone in particular.

The local prosecutor's office said an investigation was underway “to verify the possible links with the earlier acts that were prejudicial to the restaurant as well as the involvement of the yellow vests”. In 2000, Delpech became the youngest chef to win a Michelin star at 24.

Eight years later, he garnered a second star but lost it in 2017. His restaurant was gutted by a fire that started by accident in 2011.