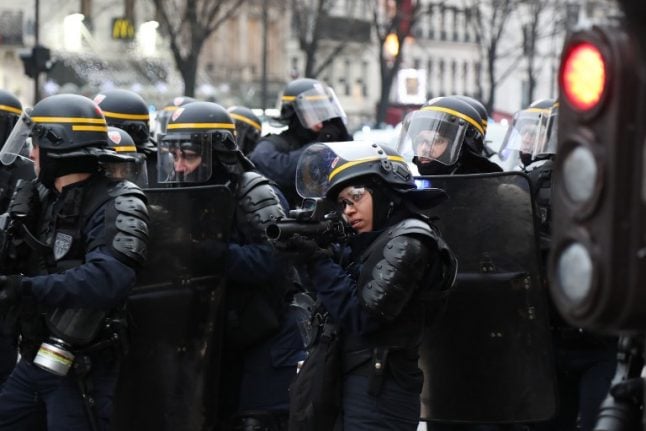 A member of the French anti-riot police aims non-lethal hand-held weapons (LBD40) during an anti-government demonstration called by the Yellow Vest "Gilets Jaunes". Photo: AFP
French police are equipped with so-called defence ball launchers that are used in riot-control operations.
Often called Flash Balls after the name of one producer of such weapons, they are designed to not penetrate the skin while still packing enough power to stop individuals from advancing.
But such “less lethal” weapons have been blamed for several serious injuries in recent years, including protesters who have lost an eye after being hit by the rounds in the head.
Here's what you need to know about France's controversial riot gun. Flash Ball on display in Marseille. Photo: AFP
What is a Flash Ball?
Flash Ball is the name used to refer to various models of weapons that fire non-lethal projectiles, usually made of rubber or condensed foam, and most often used by police for crowd control.
The name comes from a model invented by a retired teacher in France called Pierre Richert in his garage in 1990 who wanted to create a non-lethal alternative to conventional firearms.
“For a long time, I wanted to do the opposite of what everyone else had done, small caliber at high velocity that makes holes. I wanted to get to a big projectile at low velocity that hits hard without wounding,” he told France 3 during an interview in 1995.
No flash is actually visible upon firing the weapon nor upon impact of the projectile. The original model, adopted by the French police in France in 1995, has since been replaced but the name Flash Ball has stuck.
The latest model, the LBD 40, is equipped with an electronic aiming device and fires a 40mm foam projectile weighing 95 grams (3.35 oz.), effective at up to 30 m (100 ft.).
Why do the police use it?
The French police adapted the Flash Ball to combat urban violence, allowing officers to respond to assailants wielding knives or pellet guns without potentially killing them.
But over time, especially during the 2005 riots in the Paris banlieues, police began using them as a tool for maintaining public order. Photo: AFP
What are the rules of use?
Guidelines for the use of Flash Balls are laid out in Article L211-9 of the Interior Security Code, which indicates that, the weapon may be used to disperse crowds likely to disturb public order after two warnings, but only as a proportional response, in other words only when it is absolutely necessary.
However warnings become unnecessary if the crowd has directed violence towards the police, or if it is the only way for them to defend their ground.
On January 15th, Eric Morvan, the Director of the National Police, sent out a memo to his subordinates reminding them of the regulations that govern the use of Flash Balls.
Before firing, police officers are advised to have several key points in mind: ensure that bystanders are out of range in order to limit collateral damage, avoid firing on individuals less than 10 meters away to avoid causing injury, target the torso and limbs (not the head), and assure that those who are particularly vulnerable (pregnant women, the elderly and very young, the disabled) are not targeted.
Generally speaking, the use of Flash Balls should be proportional to the situation.
Why are they controversial?
Despite the description of Flash Balls as a ‘non-lethal’ weapon, they have caused numerous injuries, disfigurations, and at least one death.
On Saturday in the southwestern city of Bordeaux a volunteer firefighter participating in a yellow vest demonstration was struck in the temple, putting him in a coma from which he has yet to awaken. Photo: AFP
In 2010, Mustapha Ziani died after being struck in the chest by a projectile fired from approximately 4.4 meters away during an altercation with the police in a public housing residence in Marseille.
In another case in 2010 in Auxerre, a Flash Ball was suspected as the cause of a fatal heart attack. Flash Balls have also been responsible for permanent disfigurations, leaving victims blinded in one eye, shattering jaws, or ripping off hands.
The current model, the LBD 40, was introduced as a safer alternative to the previous model of Flash Ball, but has caused numerous serious injuries during police confrontations with the ‘yellow vests’.
High school students, senior citizens, and journalists have been among the victims, while several videos posted on social media show apparent police misuse of the weapon. As a result, various media and activists have called for Flash Balls to be banned entirely, along with some MPs and government officials.
In the image below you can see what appears to be a police officer aiming a Flash Ball at journalist Simon Louvet who captured the moment on film. Photo: Screengrab, Simon Louvet/Twitter
According to the Disarm collective and independent journalist David Dufresne, nearly 100 people have been seriously injured since the yellow vest protests began, most of them with flash balls, including around 15 who have lost an eye.
On January 16th, the Défenseur des droits (the presidentially-appointed national ombudsman) Jacques Toubon delivered a report in which he recommended the prohibition of the Flash Ball as a crowd-control device, calling them ‘dangerous’ and the cause of ‘disproportionate risks’.
More specifically, the report indicates that ‘the “non-lethal” nature of the weapon encourages its use with less caution than with traditional firearms’, despite the fact that the LBD 40 is ‘liable to seriously injure a protester.’
“Let's remove the hazardous risks of these weapons by suspending their use,” Jacques Toubon, head of France's independent human rights authority, said at a press conference in Paris.
Toubon said the government should focus on “preventing rather than treating” injuries from the use of riot guns during the protests.
This report will be transmitted to the Commission of Laws in the National Assembly, but does not oblige them to take action.
Naturally the French police see the situation differently.
“We're being attacked with glass bottles, cinder blocks, acid and bolts. An LBD is a 'firearm' that scares people. If they took them away from us, no officer will want to work during the protests,” a police source told AFP.
Do police in other countries use them?
The use of rubber bullets and other non-lethal projectiles is not new; their use was pioneered by the British government during the troubles in Northern Ireland during the 1970s.
At present, however, Flash Ball type weapons are no longer used for crowd control in the United Kingdom, nor in Germany or Belgium. Rubber bullets have been known to be used in Spain during conflicts over Catalan independence, resulting in numerous serious injuries.
Verney-Carron, the original producer of the flash-balls, claims to have clients in 37 other countries – including the United States, Russia, and 16 countries in the EU – which make up 80% of sales, according to France Info.
by Edward O'Reilly 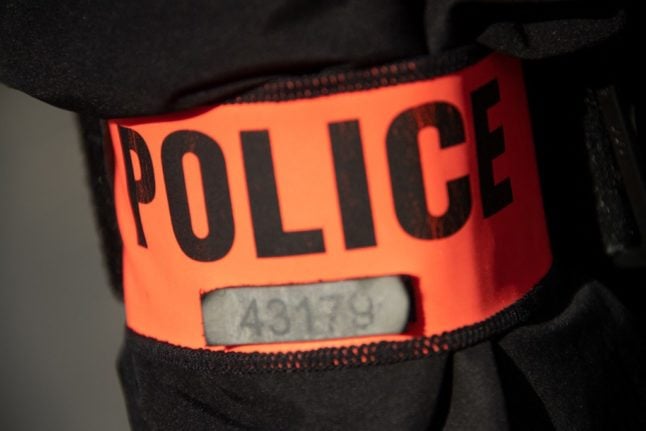