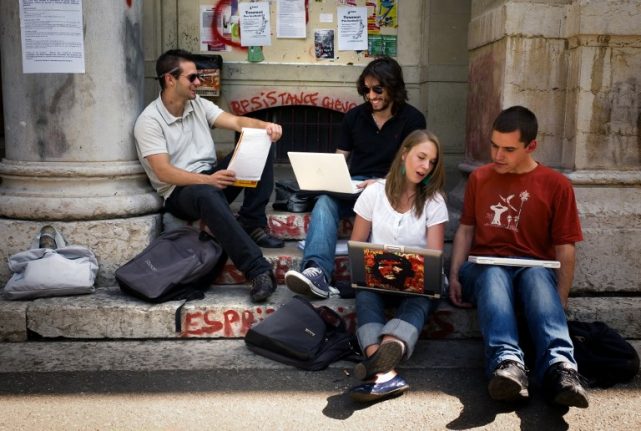 If you’re an American who’s always dreamt of going to college in France – you’re in luck – there’s a lot playing in your favour.

But before you slap on the Édith Piaf CD and start thrashing out application letters in broken French, consider the following five major steps you’ll have to embark on to get the most out of your life as a student in France.

1. Finding the right school – the two sides of the spectrum

French higher education can be described as a unique two-tier system, which is why international rankings have trouble measuring French universities against the competition in other countries.

Up until 2018 there were public universities in France’s biggest towns and cities that would accept pretty much anyone with a high school diploma and €500 for annual tuition fees.

After recent reforms these state colleges can now select which applicants to admit based on their grades and submitted letters, but the bar is still set fairly low compared to American institutions.

This tightening of standards has also come with tuition fee price hikes: €2,770 per year for undergrads and €3,770 for graduates.

Compared to the US, where average annual fees in 2018 were $9,970 for state residents and as much as $34,740 at private non-profit colleges, it remains a bargain for Americans.

And it’s not only the costs that are standardized at public universities – degrees are too – even though every institution does have its own reputation that precedes it.

That means that for American applicants to French public universities, the focus should shift more towards where in France they want to study. On the side of France’s university spectrum are the “grandes écoles”, elite institutions that subject applicants to a highly-selective admissions process.

These usually culminate in a high-pressure interview with members of the school’s faculty and administration, in most cases in French.

Most of these coveted institutions concentrate on a particular field (i.e. business, political science, engineering), and because many of them are semi-private, they can charge substantially higher tuition – though nothing close to the astronomical sums of American Ivy League universities.

Students interested in joining one of France’s grandes écoles would do best to identify their academic interests and then research the corresponding institutions.

SEE ALSO: Being an international student in France – What you need to know 2. Doing the paperwork (getting accepted and applying for a visa)

Once you’ve identified the school or schools that you want to attend, the next step is to determine what the admissions process is.

Most applicants to public universities will have to follow Campus France’s “Studying in France” (Études en France) procedure, but the “grandes écoles” normally have their own applications, somewhat similar to the admissions processes of American universities. Check your school’s website if in doubt.

Campus France is the French government’s online portal for foreign students who want to apply to public universities.

Students from a number of countries outside the European Union, including the United States, must fill in an application on the “Studying in France” platform.

As part of this application, the candidate will be required to provide identity documents such as a birth certificate and passport, as well as a high school diploma, all of which will need to be translated into French by a certified third party (sworn translator).

You will also need to explain your reasons for coming to France for school and participate in a short phone interview.

Once you have finished this process, you will be greenlit to go to the consulate and request your visa. Don’t leave this until the last minute! There is a good deal of paperwork to put together, notably proof that you can finance your stay in France.

That will mean showing the consulate that you have either a scholarship, an account with at least €615 multiplied by the number of months you plan to stay, or a financial sponsor (like your parents) with the necessary funds willing to vouch for you. 3. Finding a place to live

If you’re serious about improving your French, one of the best ways to do it is by living with French-speaking roommates. “Colocation”, or apartment-sharing, may be the best option for you, and documentation requirements are generally less stringent.

Websites like Le Bon Coin (leboncoin.fr) or Appartager (appartager.fr) feature ads posted by residents and landlords searching for someone to fill a room, and allow you to create a profile so that you can be contacted by those who think you might be a good fit for their apartment.

If you’d prefer to live on your own, a student residence might be a good option. CROUS, the government student services organism manages student residences all over France, offering mostly individual rooms, at reasonable prices

Those planning on going to graduate school in Paris should check out the Cité Internationale, where residences run in cooperation with a number of different countries offer an international atmosphere in green, campus-like surroundings. Competition is fierce, so get your application in as early as possible – applications for September must be turned in by the April prior (http://www.ciup.fr/en/).

You can also search for a studio apartment, of course, but be aware that many landlords, especially in Paris, will require a comprehensive “dossier” from any prospective tenant, requiring documentation that is often difficult for new arrivals to provide.

Another option is to stay with a French host family.

This may also be a good option for those who are searching for French language immersion, often includes one or two meals per day, and is usually fairly reasonable.

Websites like Home Stay Finder allow you to browse through a variety of locations and family profiles.

Just be aware that living in somebody’s home means living by their rules, so personal independence will likely be somewhat reduced.

FIND OUT: How France plans to attract more international students Having a French bank account is a good idea since most government institutions, public services, and some businesses will require one.

However, opening an account is more complicated than one would think, and usually requires that you demonstrate an established place of residence (“justificatif de domicile”), which you might not have if you just got here. Even if you have found a place, you might find it difficult to adequately demonstrate it to the bank (sorry, your rental contract isn’t going to cut it).

This is where a handy little document known as an “attestation d’hébergement” comes into play, in which someone with an established residence in France attests to housing you and provides a “justificatif de domicile”, like a bill, and a copy of their ID to back it up.

Even with all that, many banks may have additional requirements that can end up being obstacles to opening up an account, but BNP Paribas makes it a little bit easier on international students then many others.

5. Getting a French phone number

Cell service is much cheaper in France than in the United States, so even if your American service plan covers you in France, it will likely be worth your while to put it on pause (or drop it entirely, depending on your personal situation) and get a French SIM card.

You can get that SIM card and a pay-as-you-go plan at any of the big companies’ stores (like Orange, SFR, or Bouygues Telecom), but what you want is monthly plan, for which most companies will require a French bank account and justificatif de domicile.

Free, however, does not, and offers some of the most affordable plans, including a bare-bones one for only €2/month and plenty of data for €20 or less.

The downside is minimal customer service and coverage that occasionally leaves something to be desired, but if saving money is your goal, this is a good way to do it.

Once you’ve got all that knocked out, all you have to do is make friends, practice your French, and try everything on the menu. Bon courage!

SEE ALSO: Who are all these international students in France and where do they study?