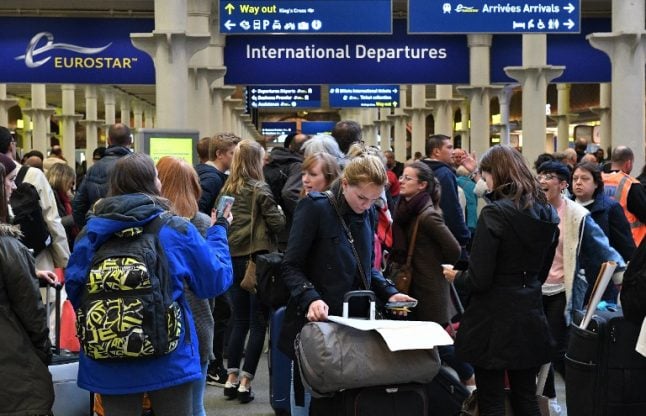 Photo: AFP
Uncertainty over what will happen after Brexit and a no-deal looking ever more likely has left many people planning to travel between the UK and the EU anxious about their travel plans and wondering how they might be affected.
This week for example, Britanny Ferries, which operates sailings between England and Northern France, announced it had modified thousands of bookings as it prepares to accommodate extra sailings in the event of a no deal Brexit (see below).
Amid this ongoing uncertainty, last month the UK government advised people traveling between the EU and the UK after Brexit to take out adequate travel insurance – even though it said that in event of a no-deal, travel would remain largely unchanged.
READ ALSO:
No-deal Brexit 'shouldn't' affect flights or Eurostar (but passengers urged to get travel insurance) In its no-deal guidance notice, the government said that flights would remain as they are today – although it advised passengers to check travel details before leaving for the airport. It assured that the rights of passengers on cross-Channel rail transport, coach transport and for those traveling by car would stay the same. For sea transport, it said that 'most' passengers wouldn't experience any difference to their journey.
This week, The Local asked the main transport companies between France and the UK had made any recent changes in increasingly likely event of a no-deal.
Ferries
Earlier this week, Britanny Ferries which run sailings from Portsmouth, Plymouth and Poole to Caen, Le Havre and Cherbourg sparked concern after announcing it had changed the bookings of 10,000 passengers to accommodate extra sailings in case of a no-deal Brexit.
After the announcement, many anxious passengers worried that their bookings would be cancelled or they wouldn't be able to make any after March 29th. But the company said no bookings had been cancelled and that all passengers travelling after March 29th would be booked onto alternative services which in the 'vast majority' of cases would involve a change to departure time on the same day of travel.
Britanny Ferries explained that it changed its timetables to make sure 'critical goods' could still be transported and had added 19 extra freight routes to ensure this.

BBC reports have worried many customers and potential passengers today. To be clear, all passengers are being re-booked, no holidays are cancelled. It is nonsense that passengers cannot book beyond March. They can. For the facts – not fear – click here: https://t.co/SmjftyRbME

Another major passenger ferry company operating between the UK and France P&O Ferries told the Local this week that it hadn't planned any changes to crossings or sailings due to Brexit.
“As long as there are goods and people travelling between the UK and Europe, P&O Ferries will continue to provide a comprehensive ferry and logistics service to and from the continent,” the company said in a statement.
“We have been engaging closely with the authorities on both sides and they have given us to understand that they are fully aware of the economic and commercial importance of the free flow of traffic across their borders. We expect them to act to mitigate the impact of any reintroduced customs and sanitary controls so that our customers can continue to rely on our services for the import and export of vital goods.”
However, P&O has been preparing for a no-deal in another way. To ensure it can still operate easily in the EU in the case of a no-deal, it announced this week that it was re-flagging all its UK registered ships to Cyprus. Planes
Although the UK government has said that current flights will be protected and that things will remain the 'same as they are today', earlier this week – the airlines trade body IATA said it feared up to 5 million flights could be threatened by a no-deal.
Those flights are the number of extra flights projected for 2019. The body fears that a no-deal could lead to a cap on flights which would particularly affect people and families over the summer holiday season when extra flights are needed.
“That current flight levels will be protected even with a hard Brexit is an important assurance. But with two months left until Britain leaves the EU, airlines still do not know exactly what kind of Brexit they should be planning for. And there is legal and commercial uncertainty over how the Commission’s plan to cap flight numbers will work,” IATA CEO Alexandre de Juniac said in a statement this week.
“In the small window remaining before Brexit it is imperative that the EU and UK prioritize finding a solution that brings certainty to airlines planning growth to meet demand and to travelers planning business trips and family holidays,”
Airlines Easyjet and Ryanair have said they have not planned any changes to schedules or bookings so far, whatever the situation on March 29th.
“Even if the outcome of talks is a no-deal Brexit, we have already put in place our post Brexit structure which ensures easyJet is able to maintain its network.  We have operating airlines in Austria, Switzerland and the UK, so that we can maintain flying both between the UK and Europe and within Europe,” an easyJet spokesperson told The Local. Car and train cross-Channel crossings
The UK has said that even if there's no deal, passenger rights using domestic or cross-border rail services won't change.
Eurostar trains running between London and Paris have not planned any changes at this stage, a spokesperson told The Local.
“At this point in time, we plan and expect to maintain services on the existing basis and timetable following Brexit,” she said.
But even if nothing is set to change just now, a no-deal could mean disruption in the long-term. According to an EU report, a no deal would have a “negative effect on the Eurostar's capacity to operate from a practical and economic point of view.”.
With so much uncertainty around, transport companies are clearly seeking to reassure passengers as much as possible.
But as the deadline looms, if you're traveling between the UK and the EU after March 29th, be sure to check your bookings regularly and travel updates.
And if you're a UK passport holder, get ready for longer queues at passport control. The second the UK leaves the EU without a deal, it becomes a third country, meaning British nationals will no longer enjoy EU rights of freedom of movement.
Also, you may want to ensure that you have at least 6 months validity (up from the current 90 days) on your passport from the time you intend entering the EU. The UK government has advised British nationals to do this to avoid any problems when re-entering Britain.
READ ALSO:
No-deal Brexit: Brits travelling to Europe 'to face passport problems and soaring mobile bills'