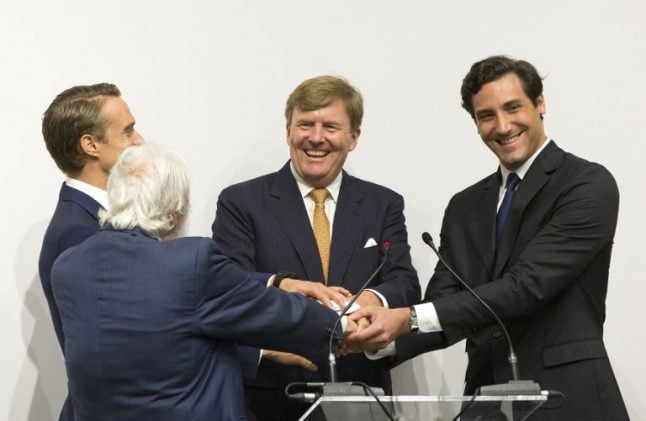 Jean-Christophe Napoléon, right, shakes hands with the descendants of his ancestor’s opponents at the 200 year Waterloo commemoration ceremony. Photo: AFP
Henri d’Orleans, Count of Paris and pretender to the French throne under the name Henri VII, died aged 85 on this week, 226 years to the day after Louis XVI was beheaded in 1793.
The Count of Paris’s passing was announced on Twitter by his son, Prince Jean of France, Duke of Vendôme, who will now become Jean IV for his royalist followers. Amongst these, Action Française, the royalist political movement, responded, ‘The king is dead, long live the king.’

Henri d’Orleans was the foremost of three pretenders to the French crown, known as orléaniste because he was descended from the Duke of Orléans, brother to Louis XIV.
Also among his direct ancestors were Louis-Philippe Ier, who reigned from 1830 to 1848 as the last king of France before being overthrown and replaced by the 2nd Republic; and Philippe Egalité, who voted in favor of the execution of Louis XVI.
After his death on Monday his son Prince Jean inherited the claim and will now become, at least for his followers, Jean IV.

The legitimacy of Henri’s (and now Jean’s) claim to the throne is contested by Louis de Bourbon, Duke of Anjou (Louis XX to his followers).
Louis is said to be the “legitimate” pretender to the throne, since he is a direct descendant of Louis XIV, according to traditional male line primogeniture (coincidentally, he’s also a descendant of Spanish dictator Francisco Franco and Queen Victoria).
He has made headlines most recently by publicly supporting the ‘yellow vest’ protest movement, and  also sent his condolences to Henri d’Orleans, via Twitter, signing his message as ‘Head of the Bourbon household’.

The third pretender to the French throne, Jean-Christophe Napoléon, titled Prince Napoléon, descends from Napoléon Bonaparte’s brother Jerôme as well as the Emperor Napoléon III, the final sovereign before the Third Republic put an end to monarchy in France for good.
Jean-Christophe has as of yet made no comment on Henri d’Orleans' death, which is unsurprising given that the London banker generally keeps out of French affairs, with the exception of occasional visits for commemoration ceremonies.
Despite the existence of these other pretenders, the orléaniste line, now led by Jean d’Orléans, commands the most support from French royalists.
This includes the far-right Action Française, most visible among royalist organizations, which claims more than 3,000 members and recently held a torchlight march to commemorate the death of Louis XVI.