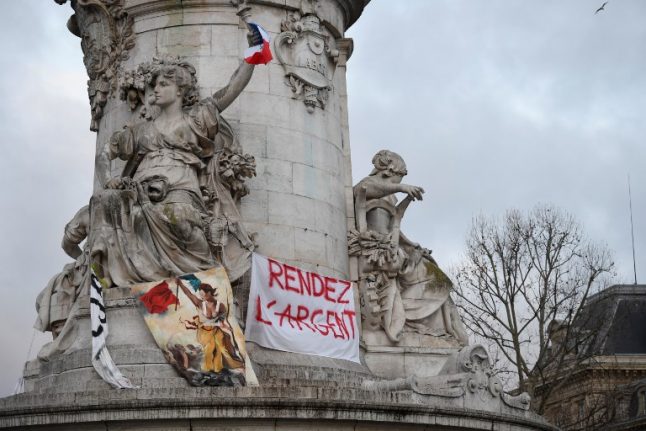 It will be the first protest of its kind and aims to stop the violence of some of the more radical yellow vest anti-government demonstrators.

Three movements, one of which is called the “red scarfs” (foulards rouges) have come together to organise a “March for Republican Liberties” in Paris on Sunday 27 January.
Laurent Segnis, one of the organisers , a 36 years old jurist,  from the outer Paris suburbs, told The Local's columnist John Lichfield: “The Gilets Jaunes have dominated the national conversation for too long. They have legitimate grievances…But nothing justifies their claim to represent the whole people or their desire to tear down the democratic institutions which may be imperfect but protect the weakest most of all.”
Who’s behind the ‘red scarves’ movement?

The main organiser is a group officially called the foulards rouges which was set up by an individual called John Christophe Werner. It has been been joined by other smaller groups, all of whom say they were shocked by the violence of some yellow vest protestors and by calls some have made for the overthrow of state institutions.

What do they want?

Some parts of the movement were initially openly supportive of Emmanuel Macron, but they have since rowed back on backing the embattled president and now say they simply want an end to the unrest that has gripped the country.

“We do not agree with the methods of the yellow vests. We demand that the representatives of the state maintain the state of law,” the movement declares on its website. How many people will turn out on Sunday for the march?

It is impossible to say but it will almost certainly be much smaller than the tens of thousands who have turned out for the yellow vest demos that have been held every Saturday for the last ten weekends.

Some 26,000 people have declared themselves “interested” and just under 10,000 said they would attend, according to the Facebook page set up for the March to be held on Sunday.

Where will the march take place?

It starts at 2 pm on Sunday January 27 at Place de la République in Paris.