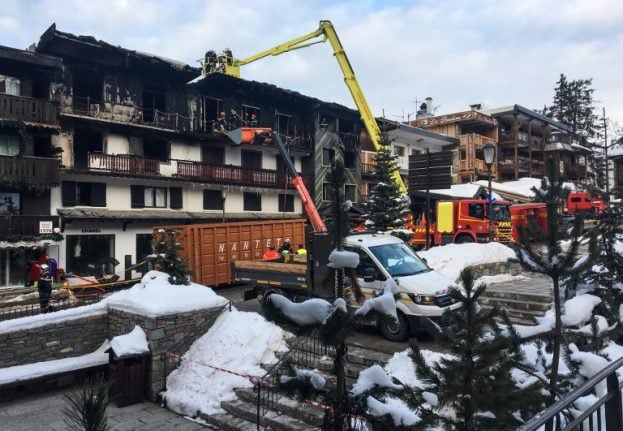 Photo: AFP
The pre-dawn blaze forced the evacuation of some 60 resort workers, including foreigners, from a three-storey accommodation building.
Firefighters found the two unidentified bodies in a burnt-out area of the building in the upmarket Courchevel 1850 ski station.
Three of the four badly injured were flown to hospital by helicopter, the local officials said.
SEE ALSO:

The cause of the fire was not immediately known.
“Some young people escaped down the facade of the building using the balustrades. Some of them were in their underwear,” said one witness, who identified himself as Victor, 27.
Titi, a private minicab driver who was at the scene “within minutes” told Le Parisien: “I saw people stuck on the top floor. Some managed to come down through the railings, but others had to jump to escape the flames.”
“There were people in tears, lost, some could not bring warm clothes. It was chaos.”
Eric Boix-Vives, the owner of a supermarket “arrived there at 5:30 am”.
“There were flames everywhere, people who were being evacuated under covers,” he said.
The blaze had already devoured the top two floors of the building by the time firefighters arrived, fire service spokesman Emmanuel Clavaud said.
Around 70 firemen working at the scene brought it under control by daybreak.
Interior Minister Christophe Castaner tweeted condolences to the families and friends of the dead and paid tribute to the firemen who tackled the blaze.
Courchevel is one of the most chic resorts in the French Alps, with numerous Michelin-starred restaurants and luxury chalets.