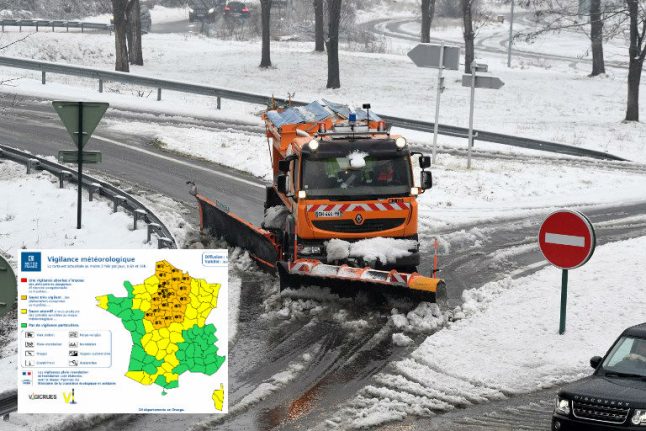 File photo: AFP
A total of 24 departments were placed on orange alert, the second highest alert, by France's national weather agency Meteo France on Monday.
The departments concerned are Aisne, Ardennes, Aube, Cher, Eure-et-Loir, Indre, Indre-et-Loire, Loir-et-Cher, Loiret, Marne, Nièvre, Nord, Oise, Pas-de-Calais, Paris and the area immediately outside the city known as the “Petite Couronne”, Seine-et-Marne, Yvelines, Somme, Yonne, Essonne and Val-d'Oise.
The departments were placed on orange alert on Monday at 4pm and were expected to remain in place until at least 4 pm on Tuesday.
Orange alert means that people in the area should remain vigilant due to the risk of dangerous weather conditions.
France's first heavy snowfall of 2019 is expected to fall on Tuesday 22nd and Wednesday 23rd of January, as a cold front blowing in from the west brings snow to much of the country. Map: Meteo France
It will be the first snowfall in Paris this winter, with the first flakes set to hit the French capital at around 7-8 am on Tuesday morning.
France's westerly regions are forecast to receive a more modest 1 to 5 cm of snowfall but it could end up looking like a veritable winter wonderland in the east.
“We're expecting five to ten centimetres of snow across a wide part of France's Grand Est region,” said France's national weather agency Meteo France.
The first snowfall is expected to fall on Tuesday morning around the Haute-Normandy border with Belgium before shifting to the greater Paris region of Ile-de-France and surrounds as well as the country's Centre-Val de Loire region.
By the afternoon Burgundy-Franche-Comté and the Grand Est region will bear the brunt of the cold front with those 10 centimetres of snow (enough to make a snowman with we hope).
“Very heavy snowfall” has been forecast for the Pyrenees, making the risk of avalanches on the slopes high for Wednesday.
Dry weather is expected to make a return to France on Friday after a fairly rainy Thursday. So make sure you keep your umbrella, antifreeze and ‘wellies' handy for the time being.