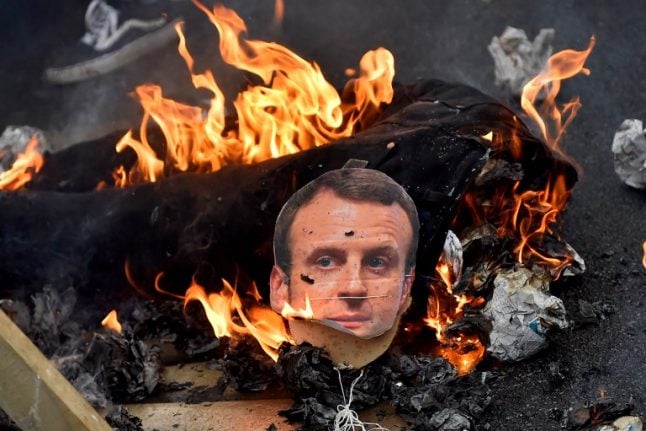 Photo: Loic Venance, AFP
Jean-Baptiste Moreau, a farmer who splits his time between parliament and his cow sheds, thought he would be part of the solution to France's political problems when he was elected.

The 41-year-old won a seat in parliament in June 2017 in what some commentators termed a “velvet revolution” led by President Emmanuel Macron, which saw grumpy voters turf out a whole generation of MPs from the country's main political parties.
Macron's victorious centrist movement filled half its parliamentary seats with people who had never held political office before, including Moreau, who posted a picture on Twitter of himself delivering a calf on Christmas Day.
READ ALSO:

But less than two years after the biggest turnover in political personnel in 60 years, France has faced another anti-elite revolt led by “yellow vest” protesters commanding widespread public support.
“Given the weight of the legislative agenda, we've been very busy in the parliament and in Paris and not on the ground enough explaining how we want to do politics differently,” Moreau said in an interview.
“And perhaps we've not been different enough from our predecessors,” the MP from the central Creuse region told AFP in what he called a “mea culpa”.

The failure of Macron's bid to restore faith in politicians in France could have repercussions in a country where anti-establishment far-right and far-left parties have never been so popular.
Research published last week by the Cevipof political institute at Sciences Po university found more than two thirds of the French people still had overwhelmingly negative views of politicians.
When asked to sum up their feelings towards them, 37 percent said they felt “distrust”, 32 percent “disgust”, eight percent “boredom” and four percent “fear”.
Only France's roughly 35,000 mayors, seen as close to the people they represent, inspired confidence in a majority of people.
Overall, cynicism was at its highest level since Cevipof began its surveys in 2007, before the presidencies of Nicolas Sarkozy and Francois Hollande, which were both judged harshly by French voters. The 2-month-old grassroots protest movement is set to stage a 10th day of protest Saturday. Photo: AFP
“The surge in confidence hoped for by Emmanuel Macron after his election has not materialised,” Cevipof director Martial Foucault commented last week, calling the results “alarming”.
Many of the new MPs in Macron's Republic on the Move (LREM) party have been shocked by the abuse directed at them since the “yellow vest” protesters from rural and small-town France took to the streets in late November.
Bruno Questel, a northern MP, was shaken in mid-December when someone fired six gunshots in front of his house shortly before midnight which was followed by a noisy demonstration of around 40 people.
“I was stunned. We've reached anew level of aggressiveness,” he told AFP, adding that the crowd insulted and threatened him when he went outside to reason with them.
“I don't think any MP deserves to have gunshots in front of his house.”
Around 50 of Macron's 305 MPs say they have been victims of some form of intimidation.
In other incidents, protesters have smashed a forklift truck through the doors of a ministry building, guillotined an effigy of Macron, and daubed graffiti on the Arc de Triomphe, one of the symbols of the French republic. Yellow vest protesters forced the gate of a ministry with a forklift on the sidelines of a demonstration on January 5, 2019 in Paris. Photo: AFP
Macron has interpreted the protests as a sign of impatience from an  electorate desperate for change — for lower taxes, better public services and democratic reforms.
All of those were campaign promises from the 41-year-old ex-banker, who like many of his MPs had never been elected before becoming president.
But analysts also see Macron's perceived arrogance, top-down governing style, and tax policies favouring high earners as reasons behind the “yellow vest” revolt.
Other research from Cevipof has shown that Macron's MPs are mostly drawn from the middle or professional classes — with little experiences of the poverty and economic difficulties denounced by the “yellow vests”.
Historian Jean Garrigues calls the level of abuse directed at MPs “unprecedented” under the fifth republic, which began in 1958.
But this new wave of anti-elitism draws from deep sources, he says.
“You can see in the 'yellow vest' movement the idea of what was called the 'abolition of privileges' during the Revolution,” he said, referring to the 1789 revolt that toppled the monarchy.
“There is this revolutionary idea, that is recurrent and cyclical in French society, of wanting to take revenge on people that are seen as the privileged,” he said.
“It's an old theme of the people against the elite.”