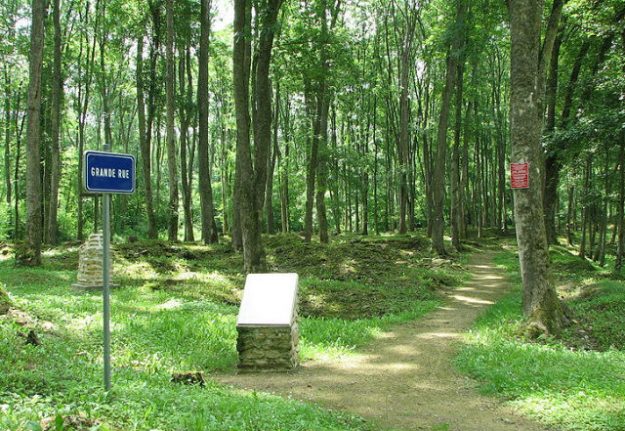 Photo: The town of Bezonvaux. Photo: TCY, Wikimedia Commons
The six mayors each oversee a small village near the river Meuse, close to Verdun in the northeast of France.
The six towns – Beaumont-en-Verdunois, Bezonvaux, Cumières-le-Mort-Homme, Fleury-devant-Douaumont, Haumont-près-Samogneux et Louvemont-Côte-du-Poivre – can be visited year round.
The reason why no one lives in these communities is that they were all destroyed during the devastating World War I Meuse-Argonne Offensive, and were never rebuilt due to the significant number of soldiers and munitions still present in the ground surrounding the buildings that remained.
Each mayor is appointed by the department’s prefect for a term of six years and charged with the preservation of the village as a sort of World War I memorial.
This involves maintenance and upkeep of the grounds, buildings, and memorials, but also the identification and proper burial of the remains of soldiers on both sides that are still being discovered. ‘Here lies Fleury-devant-Douaumont, destroyed in 1916’. Photo: Les Meloures, Wikimedia Commons
They form a telling part of the rich historical patrimony that can be discovered around the town of Verdun, which has benefitted from additional investment and attention thanks to the recent celebration of the 100 year anniversary of the end of World War I.
Know an interesting fact about France or the French that you’d like to see published? Write to us at [email protected]
READ ALSO: