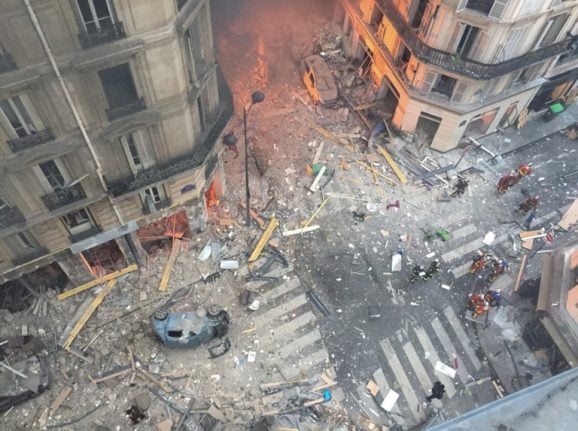 Photo: Carl Laborsse, AFP
Six buildings in central Paris close to where a huge explosion in a bakery took place in the centre of the French capital on Saturday are in danger of collapsing, Paris City Hall has warned.
Although these buildings do not present a short-term danger, significant repair work over the next few months will have to be done to secure them, the Mairie de Paris has said.
On Wednesday, it signed nine decrees declaring a state of 'imminent danger' on these buildings based on the conclusion of a study carried out by architects and the Police following the incident.

The six buildings concerned are located on the rue de Trévise, where the explosion took place and the rue Sainte-Cécile and rue Montyon nearby.

Three additional buildings close have been declared inhabitable until further notice.
Over one hundred people live in the buildings concerned, and some of them who lived in the buildings worst affected may never be able to move back in.
“We don't know if and when these buildings will be habitable once more,” Ian Brossat from the Mairie de Paris' housing department told BFM TV, adding that some people will be able to return home once their buildings have been checked.
Some building work is set to start Tuesday.
The Mairie has pledged to find a temporary or longer-term housing for the residents waiting to return home.
“We will ensure that an appropriate solution for each of these residents is found – either in social housing or in private lodgings,” Brossat said.
Four people died and 66 people were injured in the huge explosion Saturday morning in the city's 9th arrondissement, which was probably due to a gas leak. The blast was heard from several kilometres away and dozens of people had to be evacuated.