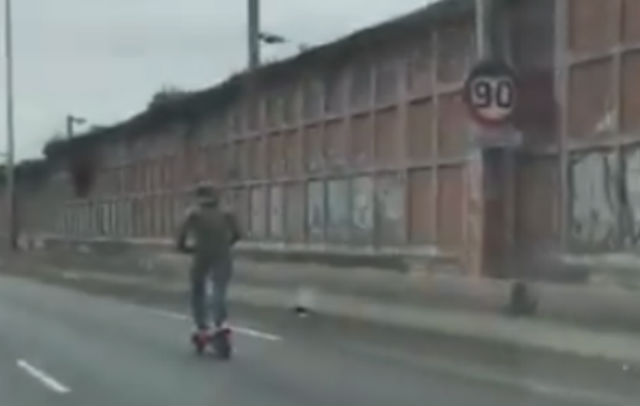 A Frenchman has become the star of the web after being filmed riding along the A86 highway through Seine-Saint-Denis outside Paris on an electric scooter.

The man, protected only by a scarf and hat, was riding at 85 km/h.

The video of the incident which has already been viewed more than a million times, was made by a taxi driver whose vehicle was driving alongside the scooter.

As the driver demonstrates the speed of the rider by filming his own speedometer he says: “This is unacceptable, we’re going to have to take care of this one of these days, because everything is possible now.”

According to Le Parisien newspaper, the scooter in question has most likely not been tampered with, but is a top of the line Dualtron Thunder, a 3,600 euro model capable of reaching speeds of up to 85 km/h thanks to its 5,400 watt motor.

However the rider could be in hot water with the law.

An electric scooter is not eligible for an automobile registration or title so it is illegal for this type of vehicle to be on the motorway.

However some internet users have pointed out the taxi driver was also breaking the law by using his mobile phone at the wheel.

Using your mobile phone while driving in France can be punished by a fine of up to €750 and the loss of 3 points on your driving licence.

The incident is only the most recent in the ongoing debate over electric scooters, which have skyrocketed in popularity over the past year, but have also been the subject of controversy over the danger they present to pedestrians and motorists.

The use of electric scooters in general has been debated heavily since their meteoric rise in popularity in 2018, especially in Paris, but is still largely unregulated as the state struggles to adapt existing legislation to this new mode of transportation.

Minister of Transport Élisabeth Borne indicated in October that electric scooters would be regulated by the Law for the Orientation of Mobility, to be debated in Spring 2019, and the Paris mayor’s office has announced that the use of electric scooters on pavements would be punishable by a fine of up to 135 euros.

But for the time being, the rules regarding the proper use of electric scooters remain relatively ambiguous.