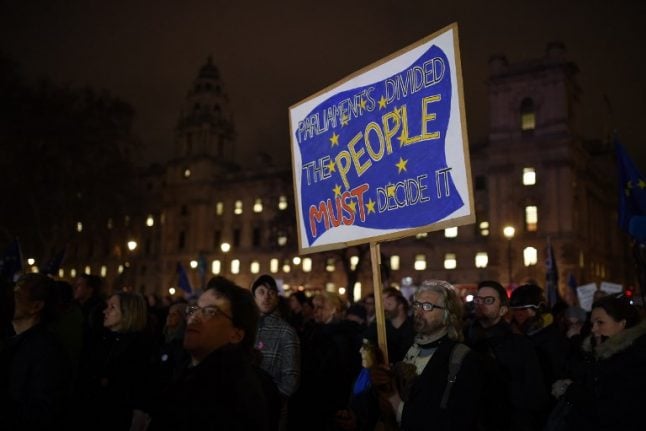 A huge majority of UK parliamentarians rejected Theresa May's Brexit deal on Tuesday evening, leaving the government's plan for the UK's exit from the EU in tatters and the future of 1.2 million Brits in Europe shrouded in yet more doubt.

LIVE: Brits in EU demand to be spared from Brexit 'train crash' after May's deal rejected

More than two thirds of MPs voted against the Brexit deal, known as the Withdrawal Agreement. The numbers represented a crushing defeat for the PM: 202 voted in favour of the agreement but a staggering 432 MPs voted against.

This is the biggest defeat in British political history in the last hundred years. The previous record was 166. Our time is NOW. Join the fight: https://t.co/5oM0unY4kH

The Labour leader Jeremy Corbyn seized on the government's massive defeat, the largest for any government since the 1920s, to call for a vote of no-confidence.

MPs will now debate whether they have confidence in May's government on Wednesday January 16th.

Jean-Claude Juncker returned to Brussels early from meetings in Strasbourg, with May expected to seek a new round of meetings with the EU Commission and EU leaders to thrash out a new deal.

But Juncker was not hopeful and urged the UK to “clarify its intentions”.

“The risk of a disorderly withdrawal of the UK has increased with this evening's vote. While we do not want this to happen, we will continue our contingency work to help ensure EU is fully prepared,” Juncker said in a statement shortly after the vote.

I take note with regret of the outcome of the vote in the @HouseofCommons this evening. I urge the #UK to clarify its intentions as soon as possible. Time is almost up #Brexit https://t.co/SMmps5kexn

Donald Tusk, the European Council president, outlined the Brexit impasse and suggested Brexit should be called off for the good of both the EU and the UK.

If a deal is impossible, and no one wants no deal, then who will finally have the courage to say what the only positive solution is?

Meanwhile the first thoughts of the president of the European Parliament Antonio Tajani was with those Britons in the EU and Europeans in the UK.

“The Brexit vote is bad news. Our first thoughts are with the 3.6 million EU citizens living in the UK and Britons living elsewhere in the EU. They need assurances with regards to their future. We will always stand by their side,” Tajani said.

While campaigners for the rights of the 1.2 million Britons in Europe expected the result their anger at being left in limbo by negotiators for 934 days was heightened by May's statement after the defeat.

Kalba Meadows from British in Europe and Remain in France Together told The Local: “There was no great surprise in the result but the sheer hypocrisy in Theresa May's statement afterwards was just breathtaking when she said 'People, particularly EU citizens who have made their home here and UK citizens living in the EU, deserve clarity on these questions as soon as possible.'

“We've been asking for clarity for over two years now, and neither she nor any of the DExEU Secretaries of State have been willing to meet us.

“I doubt there's one single EU citizen in the UK or UK citizen in the EU that didn't choke on those words. If she really wants to give us certainty, then she must push hard for the ring-fencing of our rights and do so now. It's the only just solution. Human lives must be taken out of this train crash”

How dare Theresa May say we need clarity. She has refused to ever meet us. Her Secretaries of State have refused to meet us. Do not use us now to prop up your position.

The group British in Italy were similarly outraged.

“Following the largest defeat of any government in over 100 years, Theresa May said only that EU citizens in the UK and British nationals in the EU deserve clarity as to their future and their rights.
“But she singularly failed to offer any plan as to how to achieve that.
“Our citizens' rights that have already been negotiated and agreed between the UK and EU could so easily be ring-fenced (protected).
“Theresa May has offered nothing – not even an extension to the Article 50 period in order to discuss such a proposition with Europe.”
Some campaigners said May must now allow the British people to make a decision on what happen's next.
Brian Robinson from Brexpats Hear Our Voice told The Local: “The defeat of her personal Brexit deal was comprehensive, despite her frequent threats of the danger of a 'no deal' Brexit. The stark reality is that the clock is still ticking and parliament must urgently restore democracy and respond to the irresistible demands for a People's Vote.”
After the vote British in Europe reiterated its call for Theresa May to seek the “ringfencing” of the rights of EU nationals in the Uk and British nationals in the EU.

Theresa May has lost the vote tonight. She now needs to ask the EU to commit, together with her government, to implement what they both painstakingly agreed on citizens’ rights last year in an international treaty – whatever happens next. 1/ pic.twitter.com/HuRuLMLEPi

Citizens' rights campaigners called on Theresa May, who name-checked UK nationals in Europe shortly after the heavy defeat in parliament, to return to Brussels and strike a deal for their rights.

You are right, @theresa_may @the3million and @BritishInEurope do need clarity. Go back to Brussels and offer to ring fence our rights tomorrow. https://t.co/ue7Ref4fjB

But Theresa May may not be in a position to renegotiate any deal. First of all her government has to survive Wednesday's confidence vote.

It may be a long time yet before Britons in Europe get any clarity over their futures.