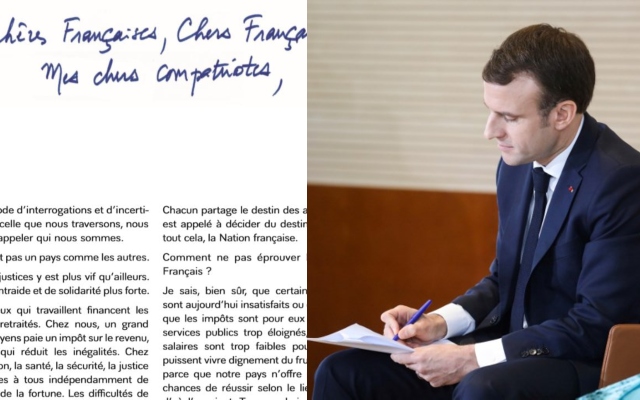 Emmanuel Macron launched his national consultation (Grand Débat) on Sunday with a hefty five-page letter in which he placed a lot of emphasis on transforming gilets jaunes anger into a blueprint for future policies, asking his disgruntled nation what exactly it is that they want and where he is prepared to budge.

At the start of the letter Macron spells out the challenge both he and the country faces.

“France is a country unlike any other,” he says. “The feeling of injustice is more alive than elsewhere. The demand for help and solidarity stronger.”

He first spells out all the good about France

“In our country, those who work pay for retirees' pensions. In our country, a large number of citizens pay an income tax, sometimes burdensome, which reduces inequalities. In our country, education, health, security, justice are accessible to all regardless of their circumstances or wealth. The hazards of life, such as unemployment, can be overcome, thanks to this effort shared by all.”

“I know, of course, that some of us today are dissatisfied or angry. Because taxes are too high for them, public services too distant; because wages are too low for some to be able to enjoy with dignity the wages of their work; because of the fact that our country does not offer equal chances of success to families from all backgrounds and areas. Everyone would like a more prosperous country and a fairer society.”

And he also spells out the ugly part of France which has been apparent over the recent weeks of yellow vest protests.

The French President then introduced the national consultation (Grand débat)

In order for hope to overcome fear, it is necessary and legitimate for us to explore together the great questions concerning our future.

That is why I proposed and I am launching today a great national debate that will run until March 15.

“For me, there are no questions off limits. We will not agree on everything, that's to be expected, it's democracy. But at least we will show that we are a people who are not afraid to speak, to exchange viewpoints, to debate.” Macron split his questions for the French people into four main sections:

Organization of the state and public services

It’s a slightly dense 2,675-word piece of correspondence that makes for an interesting read, but here’s a summary including his most telling comments which laid out his challenges to the public and his own ideas.

“How can we make our tax system fairer and more efficient? Which taxes do you think should be lowered first?”

“We cannot, in any case, pursue tax cuts without lowering the overall level of our public spending”.

“What are the savings that you think are priorities?

“Should we remove some public services that are outdated or too expensive compared to what they deliver? Conversely, do you see new needs for public services and how could they be financed?

“We won’t go back on the steps we have already taken to correct this to encourage investment and make work pay,” said Macron referring to the controversial scrapping of the fortune tax (ISF) which the gilets jaunes demand be brought back.

Organisation of the State and public authorities

“Public services have a cost, but they are vital: schools, the police, the army, hospitals and courts are essential to our social cohesion.

“Are there too many administrative levels or levels of local government? Should we reinforce decentralisation and move power over decisions and actions closer to the citizens? At what levels and for which services?

“How would you like the state to be organised and how can it improve its operation? Should we review the functioning of the administration and how?”

This system of representation is the bedrock of our Republic, but it must be improved because many do not feel represented after the votes.

“Should abstentions [in elections] be recognised? Should we make voting compulsory?”

“Should unelected citizens, chosen at random, have greater and more direct involvement in public decision making?

“Should we increase the use of referendums and who should decide on how and when?

“Today no one disputes the urgent need to act quickly. The longer we delay posing these questions, the more painful the changes will be.”

“How do we finance the ecological transformation: by income tax, by other taxes and who should be in the front line?”

“I hope that you can, beyond these topics that I propose to you, bring up any concrete subject which you feel could improve your daily life.”