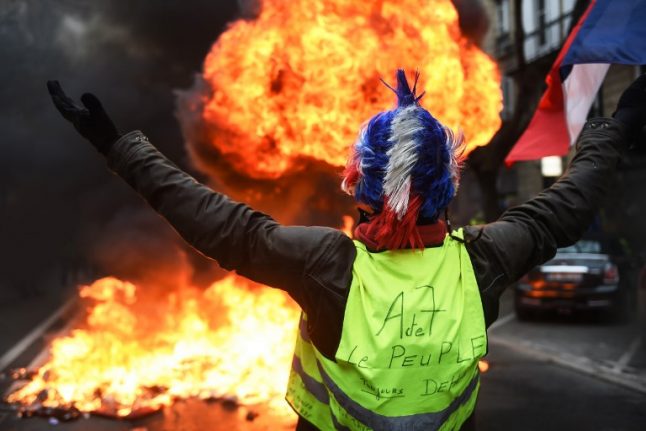 A scene from the December 29 demonstrations. Photo: MEHDI FEDOUACH / AFP
So far 10 people have died and hundreds have been injured during the protests.
Viral video
On October 18 an accordionist in the Brittany region, Jacline Mouraud, posts a video taken in her living room assailing “Monsieur Macron” and asking him what he's doing with taxpayers' money.
The post quickly goes viral, propelling Mouraud to the fore of the nascent “yellow vest” movement, named for the high-visibility safety vests drivers are required to carry in their cars.
She lists the grievances of drivers in the face of fuel price hikes, and demands of Macron: “When is this hounding of drivers, which you've pursued since your arrival, going to end?”
A petition to bring down the price of fuel is quickly posted online, and garners tens of thousands of signatures.
Mass protests
Saturday, November 17, marks the first and biggest day of road blockades across France, with nearly 290,000 demonstrators donning yellow vests. Organised via social media, the grassroots protests have few visible leaders, and reject all ties to political parties or unions.
IN IMAGES: France's 'yellow vests' fuel protests (Nov 17, 2018)
The next day Prime Minister Edouard Philippe says the government will not back down on fuel tax increases set for January, intended to help pay for France's clean-energy initiatives.
Violence breaks out in the French Indian Ocean island of La Reunion, led mainly by armed youths.
Second Saturday
After a week which sees “yellow vests” snarl traffic and block motorway tolls around the country, a large-scale demonstration takes place in Paris on Saturday, November 24. Thousands of demonstrators clash with police on the
Champs-Elysees boulevard.
More than 166,000 demonstrators are recorded across France.
IN IMAGES: Burning barricades, tear gas and water cannon – The battle of the Champs-Elysées (Nov 24, 2018)
Fuel tax
On November 27 Macron says he will propose a mechanism to adjust the fuel tax increases in case of rising oil costs, and calls for a three-month national consultation.
The “yellow vests” nonetheless call for a new protest the following Saturday.
READ ALSO: 'We won't cut fuel taxes': Macron responds to 'yellow vest' demands (Nov 28, 2018) Photo: AFP
Chaos in Paris
A third day of large-scale demonstrations takes place on Saturday, December 1, with violence erupting in Paris around the Arc de Triomphe and several upscale neighbourhoods in the city.
The government says 136,000 people protested across the country.
In the southern city of Marseille an elderly woman dies after being hit with a tear gas grenade while closing her shutters.
IN IMAGES: Violence erupts in Paris as 'Yellow Vests' return to Champs-Elysées (Dec 1, 2018)
Crisis meeting
Macron calls a crisis meeting at the Elysee Palace on December 2. “Yellow vests” representatives refuse to meet with the prime minister, with some saying they have received death threats from other protesters contesting their claim to speak for the movement.
Blockages of roads, shopping centres and fuel depots continue.
Students also start demonstrating over education reforms, disrupting dozens of high schools.
Six-month suspension
On December 4 the government retreats. The prime minister says planned tax increases on petrol and diesel on January 1 will be suspended for six months, and hikes in regulated electricity and gas prices will be frozen over the winter.
The “yellow vests” reject the moves as insufficient and press ahead with plans for a fourth Saturday of large scale demonstrations.
The government, fearing a new explosion of violence, announces 8,000 police and armoured vehicles will be mobilised in Paris.
2019 tax hikes scrapped
On December 5 Macron announces that all planned fuel tax hikes for 2019 are to be scrapped, not just suspended.
But he rules out re-imposing a “fortune tax” on high-earners, a core demand of many protesters.
Farmers say they plan to hold demonstrations the following week, to support their own demands.
READ ALSO: Now it's personal: What the yellow vests want is Macron on his knees
High-risk demonstration
On Saturday, December 8, more than 2,000 people are detained nationwide as protesters again burn cars and clash with police in Paris and other cities.
Armoured vehicles are deployed for the first time in the capital, which is on virtual lockdown in many areas, with museums and monuments including the Louvre and the Eiffel Tower closed.
Macron speaks
On December 10, Macron addresses the nation on television.
More than 21 million watch as a sombre-looking president accepts his “share of responsibility” for the crisis and outlines a series of financial measures, including a rise in the minimum wage and tax-free overtime pay.
Fewer vests
On Saturday, December 15, the interior minister reports a drop in the number of protestors to 66,500 across the country, and sporadic clashes.
On December 21, the French Senate approves measures to help the working poor and pensioners — just hours after they were adopted by the lower house of parliament — which should come into force early in 2019.
Border protests
On Saturday, December 22, even fewer “yellow vests” turn out, with an official figure of 38,600 in the evening and a focus on border crossing points with Germany, Italy and Spain.
A tenth death is recorded in a road accident in the southern city of Perpignan.
Some violence erupts in Paris where 142 people are detained, 19 of whom are placed in police custody.
OPINION: The 'yellow vest' movement is in danger of destroying itself as its dark underbelly is exposed (Dec 23, 2018)
Dwindling protests
On Saturday, December 29, the number of demonstrators taking part again drops, with some 32,000 people involved in protests nationwide.
A controversial “yellow vest” leader Eric Drouet is arrested days later on January 2 in Paris. He is kept in custody until the next day.
Eighth week
On Saturday, January 5, violent protests again dominated the headlines after clashes with police in Paris and several other cities.
Some 50,000 people take part in demonstrations across France, an increase on the previous week.
Protesters smash their way into a government ministry in Paris with the help of a forklift truck.
A former light heavyweight champion, Christophe Dettinger, is caught on camera beating two riot officers and later remanded in custody by a Paris court.
Ninth week
On Saturday, January 12, the number of protesters again increases on the previous week with more than 84,000 people demonstrating nationwide.
There is a marked decline in overall violence but several journalists are assaulted at rallies and a security officer is beaten by marchers, some wearing yellow vests, in the northern city of Rouen.
READ ALSO: Number of 'yellow vest' protesters surges but violence down (Jan 13, 2019) 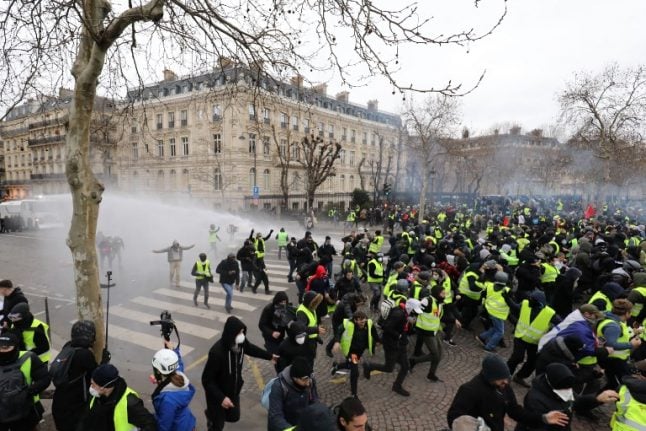 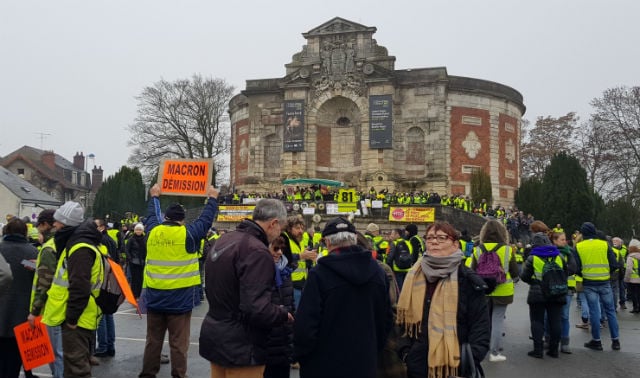 YELLOW VESTS
‘Where do our taxes go?’: Yellow vests in Bourges explain why they won’t give up their fight
Url copied to clipboard!