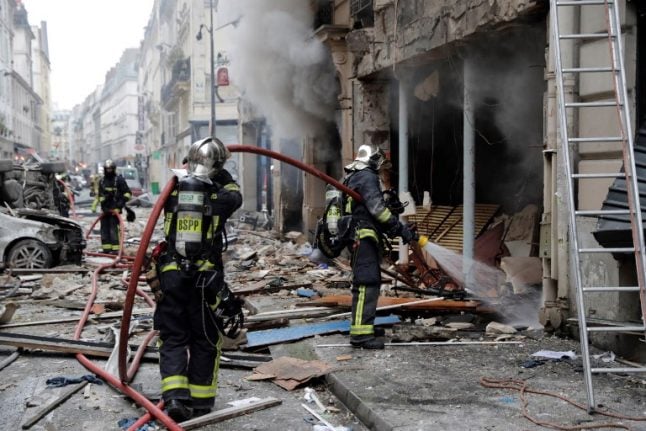 Two firefighters were killed when a gas leak sparked a huge explosion at a bakery in central Paris on Saturday, the Paris prosecutor's office said.

Thirty-seven others were injured in the blast, 10 of them seriously, the prosecutor's office said, after initial reports erroneously said four people had been killed.

The explosion, which smashed windows in surrounding buildings and damaged a number of parked cars, occurred at around 9am at a bakery (boulangerie) on Rue de Trévise in the busy 9th arrondissement of the city. Around 200 firefighters were mobilised to battle the fire and rescue residents in neighbouring buildings, Interior Minister Christophe Castaner told reporters at the scene.
The Paris prosecutor said the explosion was believed to have been caused by a “pocket of gas”.

Paris public prosecutor has publicly stated explosion was caused by a “pocket of gas”. Police experts will investigate how this pocket occurred. Interior minister confirmed info. Would like to think this will put an end to the conspiracy theories but somehow doubt it.

Images posted on Twitter showed debris covering the street and the lower part of the building blown out and on fire.

Destruction for blocks after an explosion on rue de trévise pic.twitter.com/GsrLqyasQA

Footage of today's gas leak at a bakery in #Paris
Several injuries reported so far. pic.twitter.com/U9Hk2QuLXH

Police closed off streets in front of Opera theatre as emergency services landed two helicopters in the street, apparently to evacuate victims.
“The toll appears to be high, and severe,” Castaner said, adding that 100 police officers were blocking off several streets in the area, home to restaurants and tourist attractions like the Musee Grevin wax museum and the popular Rue des Martyrs.
The blast was heard by residents and workers several blocks away. Freelance journalist Emily Molli told France Info that she was nearby when the explosion occurred.

“I was a few metres from Rue de Trévise when I heard a huge explosion. I ran to see what had happened. There was smoke and glass everywhere,” she said. “I heard people screaming. There were a number of people injured. Many people were having breakfast at the time. There will still people inside the building where the blast occurred.”

“I was sleeping and woke up by the blast wave,” Claire Sallavuard, who lives on the Rue de Trevise where the explosion occurred, told AFP.
“All the windows in the apartment exploded, doors were blown off their hinges, I had to walk on the door to leave the room, all the kids were panicking, they couldn't get out of their room,” she said.
Rescuers eventually used a ladder to evacuate the family, who lived on the first floor.

'Like an earthquake'
“There was an explosion in a bakery, it was accidental,” Sylvain Maillard, deputy mayor of the 9th Arrondissement where the blast took place, told BFM television.
“There is heavy damage, lots of broken windows, and the bakery was totally gutted,” he said.
Dozens of tourists, suitcases in hand, were evacuated from the many nearby hotels in the area, a popular weekend shopping destination for locals and visitors alike. Other residents were in bathrobes or quickly dressing in the street as police helicopters circled overhead.
“We were sleeping when we heard the noise, it sounded like an earthquake,” a teenager who lives on a nearby street told AFP.
The blast came with the city on edge ahead of expected protests by “yellow vest” anti-government demonstrations, which have often degenerated into violence and vandalism in Paris and other cities in recent weeks. Some 5,000 police are on duty in the capital with authorities fearing further violence from a hardcore group of radicalised protesters.
The central Place de la Concorde and surrounding areas were locked down by police barricades, as thousands of officers stood guard on the Champs-Elysees and other areas where protesters have clashed with security forces.