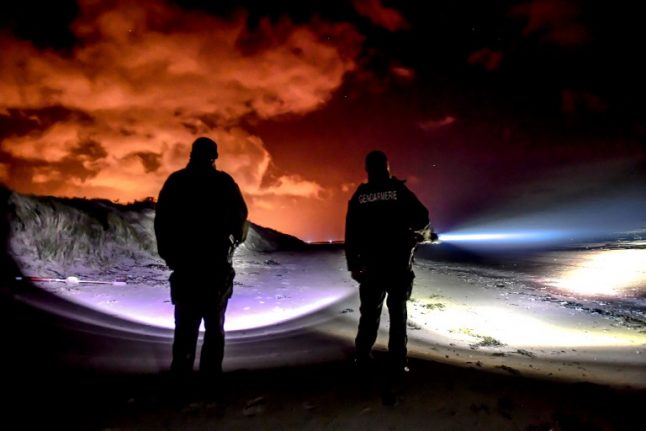 Photo: AFP
On the ground, a three-man gendarmerie patrol — part of the French police force — tramps through sand dunes, searching an 11-kilometre (seven-mile) stretch of beach near Oye-Plage, between the ports of Calais and Dunkirk.
Carrying electric torches and thermal-detecting binoculars to pick up any sign of life, the gendarmes inspect the dunes where people-smugglers sometimes hide rubber dinghies and other equipment prior to launching migrants on their way across the Channel.
The number of those attempting to sail the treacherous waters, braving strong tides in the world's busiest shipping route, rose to over 500 last year, up from a mere 13 in 2017.
The phenomenon has sparked concern in Britain, where the conservative government, eager to be seen as tough on immigration, has appealed to France to prevent the attempted crossings.
READ ALSO: Photo: AFP
“The objective is to stop them putting out to sea,” said Marie-Laure Pezant, who commands the gendarmerie unit in nearby Saint-Omer, adding that many of those who manage to slip past the authorities “get into trouble and call on us for help”.
Hide-and-seek
The migrants, many of them Iranian, are helped by people-smuggling gangs who organise the crossings, but who do not themselves board the boats.
They either attempt to steal boats, including fishing vessels moored in ports such as Boulogne-sur-Mer, or launch rubber dinghies from beaches at night.
Pezant's team inspect a metre (3-foot) deep hole in the sand, likely used by smugglers to stock equipment. Photo: AFP
The patrol then heads inland, along a path where rubbish got caught in the brambles. One gendarme picks up a discarded notice on how to use a jerrican.
“Obviously it was dropped here during transportation. That shows it was new equipment,” says chief warrant officer Sebastien Hotin.
Further up a dune, in a wartime German-built bunker, the patrol recently found a sleeping bag, broken razor blades, and empty condom packets believed to be used by migrants to keep their valuables waterproof. Photo: AFP
But it's rare they make any arrests.
“Given how big the area is we have to control, it's a lot easier for them to hide than for us to find them,” said Didier, another gendarme who declined to give his surname.
The people traffickers are believed to regularly switch points of embarcation between Wimereux, south of Oye-Plage and the Belgian border, 80 kilometres away.
France earlier this month announced it would step up police patrols around ports and beaches following consultations with Britain. Photo: AFP
London for its part has ordered a navy ship to join coastguard boats in patrolling the Channel, especially the 33 kilometres of sea that separate France and Britain at its narrowest point.
Brexit connection?
Explanations for the sudden spurt in sea crossings vary.
Some experts believe that Britain's impending exit from the European Union in late March could be playing a role, prompting a rush by migrants to enter the country before immigration controls are tightened. Photo: AFP
The weather in recent months has also been unusually calm, coastguard and security officials say.
But Fabien Sudry, a top security official in the northern Pas-de-Calais region, has linked the increase to the arrival in the Calais area of large numbers of Iranians.
They have attracted, or led to the creation of, a new people-smuggling network which packs migrants into boats rather than trying to hide them on trucks.
Stowing away on lorries remains however the preferred route for migrants attempting to cross the Channel, especially for those with little money to pay smugglers.
On Monday night, a trucker in Calais drove his vehicle through a roadblock of burning pallets built by migrants hoping to hitch a ride to Britain.
The Bulgarian driver was slightly injured, officials said.