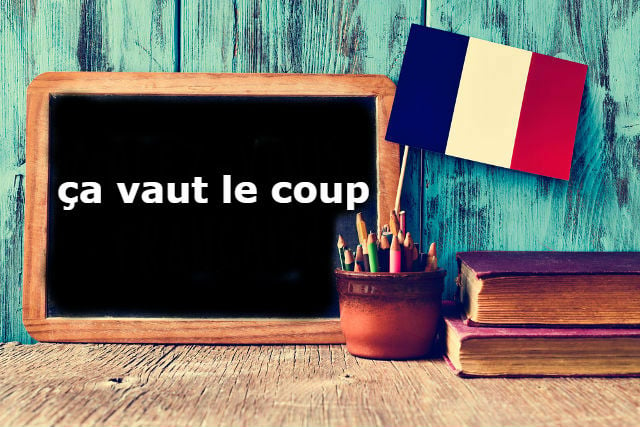 Why do I need to know ça vaut le coup?

For a start because you'll hear it all the time and you can use it when discussing whether something was useful and worthwhile or just a waste of time.

Literally it means 'it's worth the blow' from the verb valoir, which means 'to be worth' or 'to be as good as' and coup which means 'blow' or 'hit'.

Put together it's better translated as 'it's worthwhile' or 'it's worth the effort' or just 'worth it'.

For example if you're discussing the joys of a warm shower after a long run you could say 'C'est pour ça que ça vaut le coup!' (That's why it's all worthwhile)

It can also be used with other words and verbs to give it a slightly different meaning.

And if you are trying to persuade your reluctant child to try something new you would say ça vaut le coup d'essayer (it's worth a try).

Or if you want to say a book is worth reading you could say ça vaut le coup d'être lu.

Or if you are trying to persuade someone to read a book or see a film you could say que ça vaut le coup de lui donner une chance (It's worth giving it a try).

In different tenses the expression changes slightly so if you want to say something was worth it you would say ça valait le coup (it was worth the effort).

And if you want to use the negative form, for example if you think a task was a waste of time you would say ça ne vaut pas le coup.

An alternative to ça vaut le coup is the very similar ça vaut la peine – which literally means 'it's worth the pain' but which is used in the same way.

C'est un des sites les plus visités du parc, et ça vaut le coup d'oeil – It was one of the most visited sites in the park, and it was worth a visit.

Même si l'apprentissage semble difficile, la plupart d'entre elles disent que ça vaut le coup – Even though it may seem hard to learn, most people agree that it was worth the effort.