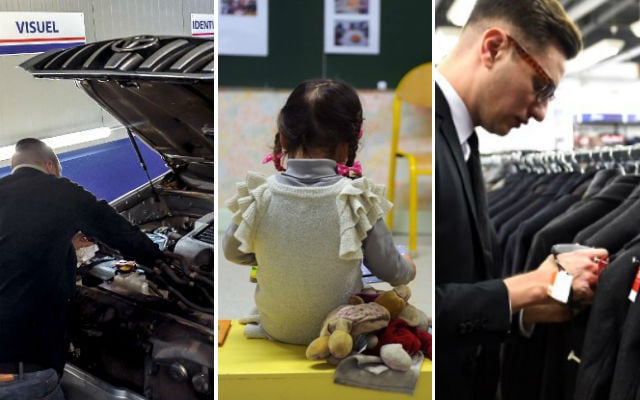 Photos: AFP
Looking for a job in France can be tough, especially if you've only recently arrived and don't know where to start.
A new survey carried out by French online jobs platform Jobintree, might be of some use to you.
This study shows which jobs had the highest rate of recruitment in France's 13 regions during 2018.
To come up with the results the site used the 3.4 million jobs published on its platform last year to come up with a list of the top ten most sought after professionals in each French region.
Grand Est
In the eastern French region of Grand Est, which has 5.5 million inhabitants, the top three sectors that are recruiting in the region are mechanic, after-sales service and maintenance technician and customer advisor.
The top three were followed by administrative assistants, shop assistants, truck drivers, sales consultants, skilled construction workers, train drivers and production officers, the people who make sure everything on the production floor is working according to plan.
READ ALSO: Hauts-de-France
Meanwhile in the northern Hauts-de-France region, which has more than six million inhabitants, the jobs with the highest level of recruitment were after-sales service and maintenance technicians, mechanics and mainline train drivers.
Making up the rest of the top ten were order pickers, a person who picks and delivers material needed for filling orders from storage, HR consultants, production officers, customer advisors, skilled construction workers, accountants and personal care assistants, for example the professionals who help the elderly.
Normandy
The jobs which saw the highest levels of recruitment in the northwestern region in 2018, according to the survey, were mechanics, after-sales service and maintenance technicians and heavy truck drivers.
These were followed by customer advisors, train drivers, skilled construction workers, administrative assistants, production officers, electricians and personal care assistants.
Ile-de-France
Meanwhile in the greater Paris region of Ile-de-France, which has 12 million inhabitants, the jobs that saw the highest level of recruitment were of a slightly different nature to those elsewhere in the country.
In top place were pre-school assistants followed by teachers and administrative assistants, reflecting the less industrial nature of the region.
Making up the rest of the top ten were after-sales maintenance technicians, mechanics, accountants, customer advisors, personal care assistants, field salespeople — salespeople who are responsible for contacting and selling goods and services to customers in their place of business or residence — and sales assistants.
READ ALSO: Photo: AFP
Brittany
The northwestern region of Brittany saw the highest levels of recruitment in the after-sales service and maintenance technician, mechanic and train driver professions.
These were followed by production officers, order pickers, customer advisors, skilled construction workers, personal care assistants, salespeople and HR consultants.
Pays de la Loire
In the Pays de la Loire, which has over 3.7 million inhabitants, the three jobs for which the most people were hired, according to the survey, were after-sales maintenance technicians, mechanics and production officers.
Hot on the heels of these were train drivers, order pickers, pre-school assistants, customer advisors, skilled construction workers, HR consultants and personal care assistants.
Centre-Val de Loire
The staff that were the most sought after in 2018 in the Centre-Val de Loire region, located in the centre of northern France, were mechanics, after-sales service and maintenance technicians and customer advisors.
These were followed by similar jobs to the other regions, with train drivers, production officers, heavy truck drivers, admin assistants, personal care assistants, order pickers and teachers also highly sought after in the region in 2018.
READ ALSO: Photo: AFP
Bourgogne-Franche Comté
In 2018 the most sought after employees in this central-eastern French region were mechanics, after-sales service technicians and production officers.
But if you're a train driver, customer advisor, order picker, heavy truck driver, field salesperson, shop assistant or admin assistant then people with your experience were also high in demand.
Nouvelle-Aquitaine
If you're looking for work and live in France's largest region Nouvelle-Aquitaine in the south west, like other regions mechanics are highly sought after.
Following on to make up the top ten were after-sales service technicians, production officers,  heavy truck drivers, customer advisors, personal care assistants, skilled construction workers, admin assistants, shop assistants and field salespeople.
Auvergne-Rhône Alpes
By this point, the three most sought after professionals in the Auvergne-Rhône Alpes are unlikely to come as a surprise, with after-sales service technicians followed by mechanics and product officers taking the top three spots.
Making up the rest of the top ten were admin assistants, train drivers, customer advisors, personal care assistants, shop assistants and truck drivers.