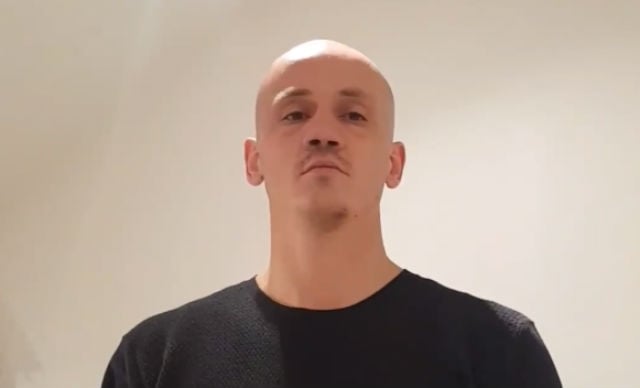 The man, named by French media as 37-year-old Christophe Dettinger, is a former heavyweight professional boxer who reportedly works for the local government in the Essonne area south of Paris.

Dettinger had been on the run since Saturday after he was filmed landing several punches and kicks on policemen, just a few hundred metres from the national parliament building.

On Monday morning Dettinger turned up at a French police station in Paris with his lawyer and handed himself in.

But before he surrendered to French police Dettinger made a video explaining his actions, that was posted on Facebook.

“I was tear gassed with my friend and my wife and the anger boiled over in me. I reacted badly,” he said.

Dettinger said that he had participated in all the “yellow vest” protests in Paris and that he had witnessed the “repression” administered by French police towards protesters.

“I have seen people injured. I have seen pensioners tear gassed,” he said before adding that he was neither extreme-right nor extreme left, simply “proud to be French”.

“I am a normal citizen, I work, I manage to make it to the end of the month but it's complicated,” he said.

He then appealed for protesters to continue their struggle albeit “peacefully”.

France's Interior Ministers Christophe Castander announced that he was immediately remanded in custody and “will now have to answer to these acts before the justice system”.

The shocking images went viral in France at the weekend, but Dettinger was quickly identified by French police.

“Sir, you knocked a colleague to the ground. You have been identified,” said a tweet from France's SCPN police union said. “For a boxer, apparently you don't respect any of the rules. You are going to learn those of the criminal code.”

The French boxing federation issued a statement condemning the violence, saying that it “ran completely contrary to the values of our sport.”

“The French Boxing Federation sends its support to the family and loved ones of the officer who was a victim of this individual, but equally to all the security forces who have been on duty these last weeks,” it said.

Dettinger's former coach, Jacky Trompesauce, had urged the father of three to give himself up to police after he was caught on camera on the
Leopold-Sedar-Senghor bridge which links the Tuileries gardens to the Musee d'Orsay.

“There was something that set it off, which I learned overnight,” Trompesauce told RMC radio on Monday morning. “There was a woman who was attacked by CRS (riot police).”

Attacking and injuring a police officer in France can lead to up to three years in prison and a fine of 45,000 euros (51,000 dollars), though sentences can be increased in certain circumstances.

Another video that shocked France from Saturday's protests was that of a high-ranking policeman throwing punches at several protesters in Toulon. Around 50,000 protesters took to the streets again on Saturday in cities around France to protest the centrist government of President Emmanuel Macron, leading to clashes in Paris and Bordeaux.

Several men driving a forklift truck also smashed open the doors of the ministry of government spokesman Benjamin Griveaux in Paris, who denounced the break-in as an “unacceptable attack on the Republic”.

Protests against fuel taxes began in rural and small-town France in late November, but then mushroomed into a wider revolt during December against the policies and governing style of 41-year-old Macron.

On Friday, Griveaux had denounced those still protesting as “agitators who want insurrection and, basically, to overthrow the government”.