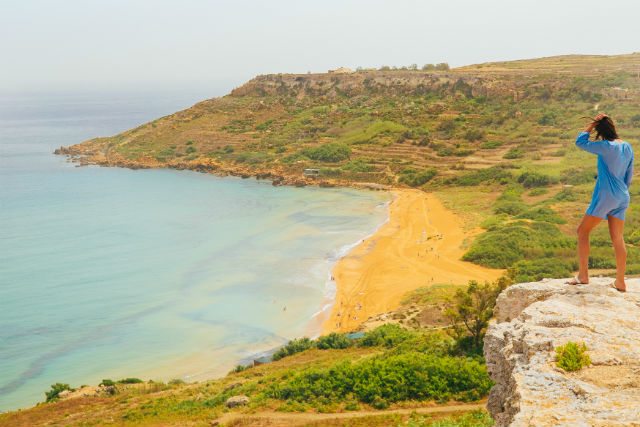 If you don’t already know, Malta is quite literally in the centre of the Mediterranean. The islands’ connectivity and accessibility is facilitated through numerous new flight routes across Europe, the Middle East and North Africa.

Since it’s an island, Malta is also easy to reach by boat, and the number of cruise ships entering the magnificent Grand Harbour in Valletta is increasing every year.

Apart from Maltese, English is an official language in Malta, so you won’t have any problem communicating with the locals during your stay. In fact, the vast majority of Maltese nationals are fluent in Maltese and English, which are taught simultaneously at local schools.

The Maltese Islands benefit from an average of 300 days of sun every year. This means you can take advantage of the island’s 12 Blue Flag certified beaches all year round. Each of the beaches are internationally guaranteed to have good water quality, accessibility and excellent facilities.

Maltese beaches cater for every type of swimmer. Some beaches and rocky shores are off the beaten track, but worth seeking out for their seclusion. A boat trip to Comino's Blue Lagoon – with its beautiful azure water – is not to be missed. Larger beaches have cafes or snack bars open during the summer season so you can stay well fed and watered during  the day. With Malta's climate, beach life lasts well into October!

Enjoy water sports and activities like windsurfing, jet and water skiing, and para-kiting. Equipment is available to hire from beach cafes or shops nearby.

Discovering Maltese culture doesn’t require much effort. No two streets are alike and there is always something going on, whether it is a spontaneous community celebration or a pre-planned event.

Culture has been at the forefront, particularly since Malta’s capital city Valletta became European Capital of Culture, recognised by the European Commission, during 2018. Valletta boasts many titles, all recalling its rich historical past. It is often declared a masterpiece of the Baroque; a European Art City and a World Heritage City. Today, it is one of the most concentrated historic areas in the world.

The Maltese Islands’ archipelago is made up of seven islands; however, only three are inhabited: Malta, Gozo and Comino. Malta, being the largest of all the islands, is where the Malta International Airport is situated.

For a change in tempo and scenery, hop to Malta’s sister islands of Gozo and Comino.

Travelling between Malta and Gozo is done by means of a fast and efficient ferry service. The Gozo Channel ferry service departs from Malta every 45 minutes (transporting both vehicles and passengers), with the journey taking approximately 25 minutes.

To reach Comino, one must catch a boat from either Marfa in Malta or Mġarr in Gozo. These journeys are very regular too so you can easily hop between islands.

Maltese food is full of flavour and colour, typical of a central Mediterranean Island, influenced by its closeness to Sicily and North Africa, but with a special twist.

Be it a glass of smooth local wine accompanied by a platter of olives, some ġbejniet (local sheep's cheeses), zalzett (coriander flavoured Maltese sausage) with galletti (Maltese water crackers) and some bigilla (broad bean pate) served with Maltese bread and olive oil, there are so many local dishes to try you won’t know where to start. Make sure to try a hot pastizzi (savoury ricotta filled pastries) on a cold day, washed down with coffee or tea.

Summer days at the beach means ħobs biż-żejt, a popular snack made from a thick slice of crusty Maltese bread, rubbed with juicy, red tomatoes and topped with mint, a little onion, sheep's cheese and anchovies, all soaked in delicious green olive oil.

All of the three main islands have an abundance of reefs, caves and wrecks that make diving here some of the most interesting in the Mediterranean.

The calmness and clarity of the sea makes for excellent visibility creating the perfect conditions for first time divers and beginners. For the more experienced divers, there are plenty of challenging dives to choose from – including a number of shipwrecks.

Moreover, there are several types of diving courses and activities offered by locally licensed diving schools.

Aside from diving, horseback riding is a popular activity with locals and visitors alike. Horse racing is one of Malta's prime spectator sports, with races held every Sunday, between October and May.

There are also plenty of sports-related events, such as the Rolex Middle Sea Race, a highly-rated offshore classic race, often mentioned as a ‘must-do’ race among yachting enthusiasts. Those who are into athletics will enjoy the Malta Marathon or the international Super League Triathlon.

Whilst those who would much rather find their zen will enjoy the many idyllic locations for their yoga session.

The Maltese Islands are not just a place to meet, but also an ideal location in which to do business. Whatever the size, formality or informality of your corporate event, Malta has the expertise and venues to suit. The Maltese Islands offer a variety of magnificent castles, palazzos and forts as function venues.

State-of-the-art conference hotels or venues are available for any size of event, and include the 16th century Mediterranean Conference Centre, once a hospital of the Order of the Knights of Saint John, and considered the most advanced hospital in Europe at the time.

The Maltese Islands have been home to Hollywood blockbusters such as Gladiator, U-571, The Count of Monte Cristo, Troy, Munich as well as prestigious dramas and sitcoms such as the BBC's Byron and ITV's Coronation Street. In recent years, Malta has become one of Europe's most popular film and television locations – dubbed “the Mediterranean's mini-Hollywood” by the London Times. Malta has also teamed up with Bollywood and the first blockbuster was shot here last year.

The islands' beautiful, unspoiled coastlines and breathtaking architecture have ‘doubled' for an amazing variety of locations, both on the big and small screen. Steven Spielberg, Ridley Scott, Wolfgang Petersen, Guy Ritchie and other renowned directors, as well as a host of A-list celebrities such as Russell Crowe, Brad Pitt, Sharon Stone, Madonna and Sean Connery, all experienced Malta's movie-making facilities and its many charms.

This article is sponsored by Visit Malta.