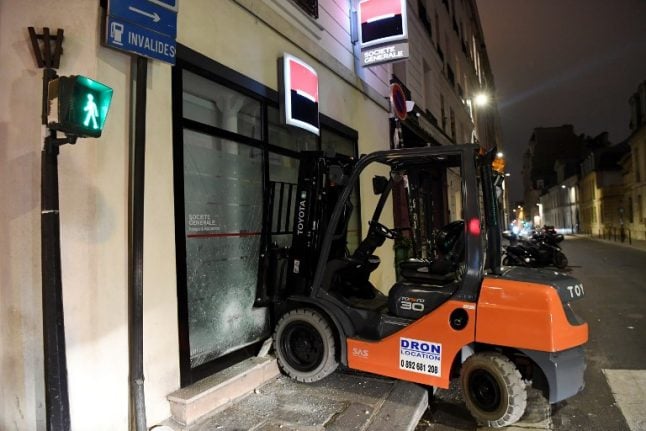 Videos posted on social media show the forklift truck ramming through the gates of the ministry forcing government spokesman Benjamin Griveaux and his aides to be hurriedly evacuated to a safe place.

The incident at the ministry for relations with parliament on Rue de Grenelle in central Paris occurred on Saturday afternoon after violence flared in parts of Paris during the latest yellow vest protests.

The video shows an individual driving the fork-lift at speed towards the gates with another person stood on the back. A small crowd cheered as the gates were rammed open.

Reports said individuals then went inside the ministry to smash cars and windows. The truck was also used to target a number of banks on Rue de Grenelle in the 7th arrondissement of the city. After the incident Griveaux said: “I was at my department this afternoon when “yellow vests” smashed the the gate with a construction machine found in the street, they also broke some windows and the ministry's cars are unusable.

“We will not give in to the violence nor to those who call to overthrow the government,” Griveaux added.

“It is the Republic that has been attacked, its institutions and the democratic form of government. I hope the internal CCTV cameras at the ministry will identify those responsible so they can be punished”. The minister had been a target for the “yellow vests” anger after he denounced those still protesting as “agitators who want insurrection and basically to overthrow the government”.