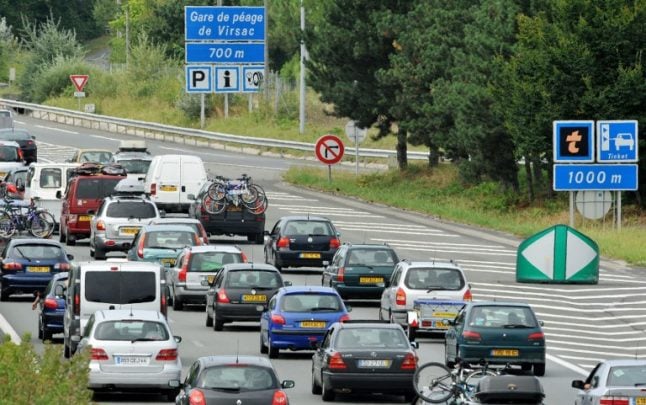 Photo: AFP
First of all the big thing that won't change in 2019 is the planned hike of taxes on petrol and diesel.
French president Emanuel Macron binned those tax hikes in an rather unsuccessful bid to quell the “yellow vest” protests. And the French government isn't planning any major change to the speed limits as occurred in 2018.
But certain things, some major, some minor will change in 2019 and they are likely to affect all those with cars.
Cost of breaking down on a motorway to rise
France has set base rates for the cost of having to call out breakdown services if your car grinds to halt on the autoroute and those costs will rise slightly in 2019.
If you break down or have an accident on the motorway in France the price of calling out help and the towing of your car will be at least €126.93. The cost rises if the intervention lasts more than 30 minutes or if the car has to be towed to a garage over 5km away.
The cost also goes up by 50 percent if the breakdown occurs between 6pm and 8am as well as on weekends or public holidays. New all-seeing 'turret' cameras
In 2019 the French state will deploy its latest weapon to crack down on all kinds of driving offences including speeding.
They are called “turret” cameras or radars tourelles in French.
Over the next year some 6,000 turret cameras will be deployed in France with the aim of reducing the number of road deaths and injuries although they should also prove a nice little booster to the government's coffers.
That is if the 'yellow vest' protesters don't destroy them all as they have been doing with most other speed cameras in recent weeks.
The difference with ordinary speed cameras is that the “turrets” have a superior camera meaning they can pick up all kinds of driving offences, not just speeding or jumping red lights.
They can detect if a driver is wearing their seat belt or using their mobile phone at the wheel and they have a range of around 100 metres
It is estimated there will be around 60 of these new cameras in each department across France by the time they have all been rolled out in 2020.

Car insurance to rise slightly
There will be a slight rise in the price of car insurance in 2019. The rise has been put down the increasing cost of repairing damaged cars which will be added on to customers' bills by insurance companies.
Experts believe the rise will be between 1 and 2 percent.
Motorway tolls to rise steeply
Motorway tolls are another item of road “furniture” that have been targeted in recent yellow vest protests (see pic below)  with many set ablaze or destroyed by by other types of vandalism.
And protesters might have more reason to target them in 2019 given that the price of tolls, known as péages in French are set to rise steeply.
Part of the reason for the rise is to cover the losses caused by the violent protests.
A rise of 1.9 percent was announced by the government last December although it waits to be seen whether the hike will be implemented with the government fearful of sparking more protests. (AFP)
Extra driving lesson for new drivers
In a bid to cut down the number of accidents involving new drivers French authorities will put in place a system whereby those who have recently passed their tests can take up the option of a day's complementary lesson. If drivers opt for this then they will see the probation period for their licence reduced by a year.
Carpooling scheme
A “sustainable transport package” worth up to €200 as a way of encouraging people to carpool was introduced by the French government on January 1st.
The idea is to encourage employers to cover the carpooling costs for their staff and if they do this they will be exempt from payroll social contributions.
Car tests
Following the “yellow vests” crisis, the new tighter contrôle technique (car roadworthy test) for diesel vehicles, originally planned to be rolled out on January 1st, has been put on hold for six months.
Unless the move is completely abandoned, from July 1st drivers of diesel vehicles will be forced to undergo much stricter tests, which will almost certainly be more expensive and take longer. (AFP)
Incentives for exchanging cars to increase
From January the financial incentives given to car owners who exchange their old polluting vehicles for new greener ones will double for those on modest incomes.
The grant or prime as it is called in French will rise from €2,000 to €4,000 for the 20 percent of households on the lowest incomes and for those drivers on low incomes who have to drive more than 60km a day to get to and from work.
The prime rises to €5,000 for those who buy 100 percent electric or hybrid vehicles.
Penalties for polluting cars to rise
To help finance the grants that will be paid to drivers who change their old cars for greener models the French government is to increase the financial penalties on polluting cars.
Car owners whose vehicles emit 117 grams of CO2 per km will have to pay an extra €50 a year. Green push in Paris
Paris Mayor Anne Hidalgo has confirmed that vehicles carrying Crit'Air 4 stickers will not be able to enter Paris on weekdays from July 1st 2019 in an effort to reduce pollution in the French capital.
This means that no diesel vehicle older than 13-years-old will be able to enter Paris.
The rule will hit light trucks as well as cars and is set to impact about 800,000 vehicles in the greater Paris region of Île-de-France, according to a report in BFMTV.
The people of the department of Seine-Saint-Denis to the north of Paris will be hardest hit, with an estimated 128,015 of the car users in the area driving a Crit'Air 4 labelled vehicle.
Pick-up trucks
The government is cracking down on pick-up trucks, which have long been exempt from environmental fines despite the fact that they are highly polluting vehicles.
From January 1st, ecological penalties will apply to pick-up trucks with four doors.
And finally … uninsured drivers
If you're one of the hundreds of thousands of uninsured motorists in France, beware.
From January 1st, the French police will have access to files that make it easier for them to detect uninsured vehicles on the road.
Motorists driving without insurance face fines of up to €3,750 which can be accompanied by additional penalties such as the suspension or cancellation of a license and even the confiscation of the vehicle.