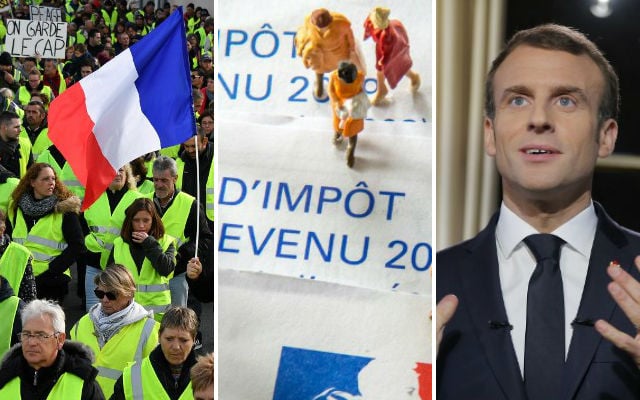 Photos: AFP
Macron reaching out to the people
French President Emmanuel Macron will no doubt be feeling under a bit of pressure (to say the least) after being forced to make a series of emergency concessions, including the removal of a planned tax increase, to the “yellow vests” at the end of 2018.
Macron said in his traditional New Year's Eve address that he acknowledged the “anger” among anti-government protesters but warned that hateful speech and actions would not be tolerated.
“We have, thanks to the debate that has begun, given vitality to our democracy,” said Macron in his speech.
In January, he is set to meet the mayors of 13 of the country's regions and he has also planned to write a letter to the French people in the middle of January to announce his “expectations” ahead of a six-month consultation  – Le Grand debat – with civil society groups, mayors, businesses and the “yellow vests” to discuss taxes and other economic reforms. Photo: AFP
However the opposition has argued that the big consultation is just the government's way of blowing hot air when it has no plans to further adapt its reforms.
French politician Chantal Jouanno, who is responsible for leading the consultation has told the government that “the meetings are not intended to turn into political meetings.
“Ministers are asked not to make speeches but to sit down, listen and respond to citizens when appropriate,” she said.
The “yellow vests”
Meanwhile now that the festive period is over, the gilets jaunes — or at least some of them — are gearing up for more protests.
According to reports in the French press, three events were scheduled for the first week of 2019 as certain members try to breathe fresh life into the protest movement which saw its numbers depleting over Christmas and the new year.
On Wednesday evening in Paris, some 600 people said on social media that they were planning to join a rally organized by one of the movement's controversial members, Eric Drouet and 4,000 people said they were interested in attending however Drouet was arrested for not securing permission for the protest in advance.
On top of that Act VIII, referring to the eighth weekend of Saturday protests, is set to take place this weekend with the idea of reviving the movement. Photo: AFP
So far, 9,500 have said they plan to take part, with more than 63,000 saying they are “interested”.
Yves Garrec, one of the prominent “yellow vests” in Toulouse told BFM TV that a new phase of the protests was being put in place.
“We evacuated the roundabouts to get ready for Year II and major actions are in preparation,” he said, without giving away further details.
Interestingly, some of the “yellow vests” are pushing for the movement to become an established political force in this year's European Elections (more on that below).
But whether the movement will regain the passion seen during weekend protests towards the end of 2018 remains to be seen although there's no doubt Macron will be doing all he can to make sure the scenes of Paris burning that were shared around the world last year are not repeated.
European elections
The European elections, set to take place in May this year could be more complicated than previously thought for France what with the news that the “yellow vest” movement may be announcing its own list of candidates.
Despite the fact that the protest group has struggled to create a coherent structure, there are some among them who have clear political aspirations, including Benjamin Cauchy who has been at the forefront of the movement from early on.
On top of that the hard-left French Communist Party (PCF) and the hard-right National Rally (formerly National Front) party have already said that they would like to integrate “yellow vest” candidates onto their own list for the European elections.
Although it remains to see if any members of the so far staunchly apolitical group can be tempted by offers from established parties. French singer Francis Lalanne (C) sits with “yellow vest” protesters as he gives a press conference on the creation of a “yellow vest” list for the European elections of May 2019. Photo: AFP
In the meantime however it seems like the idea of “yellow vest” members standing in the European elections is gaining support in France and according to an interactive Harris poll for RTL and M6, 47 percent of French people are in favour.
Before the “yellow vests” arrived on the scene Macron's La Republique en Marche (LREM) party was neck and neck with the National Rally in the polls.
And some say that the situation could in fact be deemed positive for Macron's party, with the protest movement's candidates potentially able to divide those who may have voted for the far right.
Income tax revolution
After years of delays, on January 1st France ditched a system whereby residents file income tax returns based on the previous year's earnings, replacing it with a system where the state deducts the taxes directly from people's salaries or pensions each month.
Opinion polls show the French broadly supporting the change but the shift presents risks for President Emmanuel Macron, not least that workers may feel poorer when they receive their new net pay — even if they will no longer have to save up to pay their taxes the following year.
Any glitches in the new system which could see taxpayers pay more than they bargained for could further infuriate the “yellow vest” anti-government protesters who have been demonstrating around the country since mid-November over Macron's fiscal policies, which they see as skewed towards the rich. Photo: AFP
Reforms
For the first quarter of 2019, the government will focus on three reforms: unemployment benefits, reforming the state and the revision of the 1905 law separating religion and government affairs.
The reform of France's unemployment benefits which is central to Macron's social program, was officially launched in November but there is still a lot of work to be done.
The changes that Macron wants to bring in include a “safety net” for the self-employed, meaning that entrepreneurs, craftsmen, traders or farmers who find themselves in the unfortunate situation of having their business liquidated will, for the first time, receive compensation from the State.
Other changes include the right to unemployment benefits for workers who resign and incentives for companies to limit unstable contracts.
Meanwhile, the state reform, which was originally delayed in July 2018, is also a big item on the agenda for the French government in early 2019. Photo: AFP
The reform includes plans to reduce the number of French MPs by 30 percent and to have 15 percent of MPs (61 out of 404) elected by proportional representation in the legislative elections of 2022.
Macron described the reform, which also includes reworking big public service bodies such as the Court of Accounts and Council of State, to Le Monde as the “mother of all battles”.
Finally the revision of the law created in 1905 to separate the church and the State is set for some revisions in 2019.
The idea behind the changes is not to fundamentally change the law but to adapt it with the intention of making Muslim institutions in France and where their financing comes from “more transparent”.
Meanwhile, the pension reform, which was also postponed and promises sweeping changes such as creating one single pension system, is set to take place after the European elections in May.