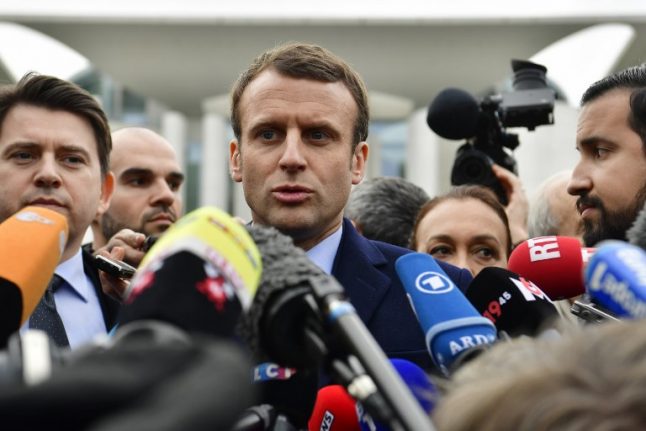 Emmanuel Macron flanked by Sylvain Fort (L) in 2017. Photo: AFP
Sylvain Fort, an expert in opera music who once ran his own PR agency, was a key member of Macron's campaign team from 2016 who helped the 41-year-old plot his unexpected rise to power.
After Macron's election in May 2017, Fort joined the presidential staff as a speechwriter but took on more responsibility as a media advisor in July after what was widely seen as a bungled response to a scandal involving an ex-bodyguard.
“After two and half years of non-stop work for the candidate and then our president, I want to pursue other professional and personal projects, and above all give more time to my family,” the 46-year-old said.
“Emmanuel Macron's understanding of the state and his complete commitment to France are what the country needs in these moments of doubt on our collective destiny,” Fort added.
“I am proud to have served him and I assured him of my complete loyalty when I informed him of my decision several weeks ago.”
The resignation comes as Macron looks to turn the page on a torrid six months that have seen his approval ratings tumble to their lowest ever level.
In July, video emerged of his senior security advisor and one-time bodyguard roughing up protesters during a demonstration.
And from the end of November, so-called “yellow vest” protests in rural France over tax hikes on transport fuel mushroomed into a country-wide revolt over his policies and governing style.
Macron is known to be an exacting boss, often firing off messages late at night to his team, and the pace of his reform-drive and foreign travels have left many staff feeling exhausted, insiders say.