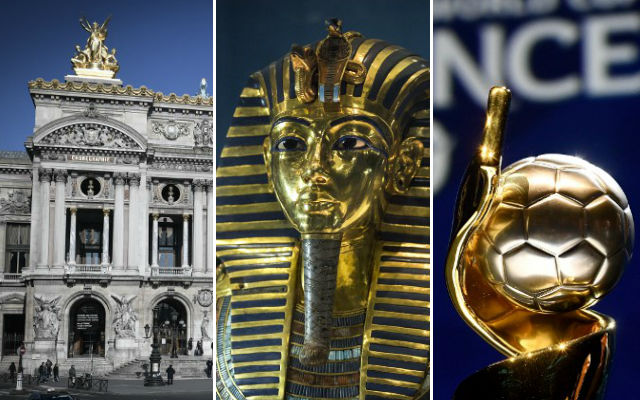 If you're in France and you like rugby, this is an event not to miss out on. Paris's Stade de France will host France-Wales on February 1st and France-Scotland on February 23rd. ‘Tutankhamun, the treasure of the Pharaoh’, is the first stop of a touring exhibition in partnership with the Grand Egyptian Museum, which is due to open in Egypt 2022. In total, 150 objects that were discovered in 1922 in the most famous Egyptian pharaoh's tomb will be on show, many of which have never left Egypt before. The exhibition will also include some masterpieces from the Louvre. Photo: Mohamed El-Shahed, AFP
Homer exhibition, Louvre in Lens, March 27nd to July 22nd
France's biggest exhibition dedicated to Homer, the author of the Iliad and the Odyssey is being held in Louvre-Lens, a satellite of the Louvre museum, in northern France. It will feature archeological masterpieces as well modern ones, and explore the Greek poet's life and the significance of his work throughout the ages.
Eldorado Lille3000, Lille, April 27th – 1st December
Since Lille was voted cultural capital of the year in 2004, it's lived up to its reputation of being a buzzing, cultural hub and its yearly festival Eldorado Lille3000 is no exception. This year promises to be exciting with Mexico as a main theme, with shows, gardens, light shows, balls, debates and other events planned outdoors and indoors over 5 months throughout the lively northern city.
500 years of Renaissance and Leonardo da Vinci festival, Val-de-Loire region, all year
500 years after he died, France's most famous Italian Leonardo da Vinci is being celebrated in style in the Val de Loire region, where the artist lived. 500 events are being planned, some of them in the famous and stunning Loire castles of Chambord, Amboise and Clos Lucé, da Vinci's home with something for everyone to enjoy including exhibitions, outdoor light shows, a renaissance music festival and plenty more.

This year, the #LoireValley celebrates the 500th anniversary of the French Renaissance with a number of special events!
Check out our list of must-sees➡ https://t.co/tJIKqWzZHY #500Renaissance #Get2KnowFrance pic.twitter.com/ZehtN2sXiw

350th anniversary of the Palais Garnier, Paris, all year
For those of you who like opera, this year marks a double anniversary as the Opéra de Paris, commissioned by Louis XIV turns 350 and Paris' other opera house, l'Opéra Bastille turns 30. A rich and original repertoire has been especially chosen for the event, with operas and ballets, many of them French and some with a modern twists and even some hip hop. And even if you don't manage to see any shows, the Opéra Garnier in itself, a magnificent 18th century masterpiece with its remarkable ceiling painted by Mark Chagall, is well worth a visit.

After 'Les Bleus' brought home the World Cup last year, 2019 could be another year of football frenzy in France as the country is hosting the FIFA Women's Football World Cup finals at the Groupama stadium Lyon from June 7th to July 7th. Will it be 'Les Bleu(e)s' turn to win it at home again – as France did in 1998?
La mer XXL, Nantes, June 29th – July 10th
The western city of Nantes is quite a few miles from the sea, but it won't feel like it in this new exhibition covering all aspects of the sea and oceans. The event is based on the famous 'Expositions Universelles' world fairs that took place in Paris in the early 1900s. There will be submarines, pirate ships, films, concerts, maps, literature and a host of other interesting and original things to explore.

Nuit Blanche, outskirts of Paris, October 6th-7th
Every year over one weekend in October, Paris museums and other locations stay open to visitors all night. The festival is very popular, and until now, it has been restricted to Paris only. This year however, Paris City Hall has vowed to extend it beyond the walls of the capital in a bid to make the night more accessible. Some events could even take place on the périphérique ringroad. Photo: Zakaria Abdelkafi, AFP
Johnny Festival, Paris, December 6th
Two years after the death of French singing legend Johnny Hallyday, a spectacular show paying tribute to the superstar will be held in Paris, with singers, dancers and musicians singing 25 of his most famous hits. The venue is yet to be confirmed, but fans are already getting very excited. If you're one of them, watch this space!