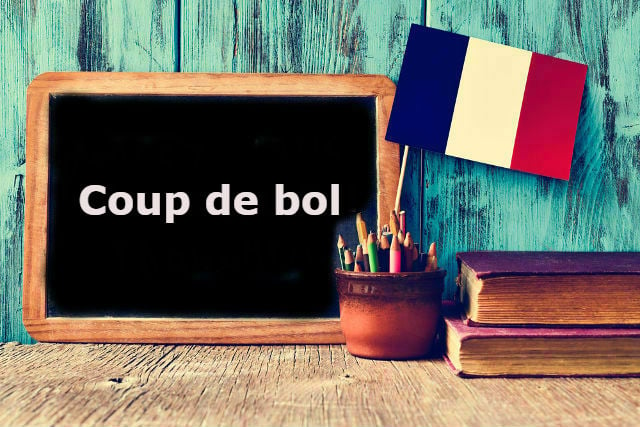 Why do I need to know coup de bol?
It's a great expression to know as it often crops in conversation and once you know what it means you'll find you'll frequently want to use it to describe it to describe positive things that happen to you in everyday life, such as catching a bus on time.
What does it mean?
Coup means ‘knock' or ‘smack' and bol means bowl and you may be thinking that when those two words are put together to describe something that happened, it sounds pretty painful.
In fact, this expression has nothing to do with being whacked by a bowl, as its literal translation may suggest. It is much more positive than that, and it means to have a stroke of luck or something positive happening by chance.
Different sources suggest that in this instance the word bol refers not to the container the French drink their morning coffee from but to an old French word for bottom, which has been used in French slang since the 18th century to describe being lucky.
For example, J'ai eu un coup de bol, il restait de la place pour le concert (I was lucky, there were still some tickets left for the concert) or Coup de bol, il m'a embauché tout de suite ! (I got lucky, he recruited me right away!).
That's why you'll hear bol cropping up in a number of other French expressions: avoir du bol (being lucky), pas de bol (bad luck), ras-le-bol (being fed up).
How do I use coup de bol?
Coup de bol is often used on its own. For example:
Coup de bol ! Je suis arrivée juste à temps. That was lucky! I got there just in time.
Quel coup de bol ! Il a réussi tous ses examens. How lucky he is! He passed all his exams.
In a sentence, coup de bol is usually used with the verb avoir. For example:
J'ai eu un coup de bol, quelqu'un a retouvé mon portefeuille. I was lucky, someone found my wallet.
Les touristes ont eu un coup de bol, ils ont évité l'orage. The tourists got lucky, they managed to avoid the storm.
Nous avons eu un coup de bol, il n'y avait pas grand monde au musée. We were lucky, there weren't many people in the museum.
Other uses:
Elle aura besoin d'un coup de bol pour décrocher ce job. She'll need a stroke of luck to get that job.