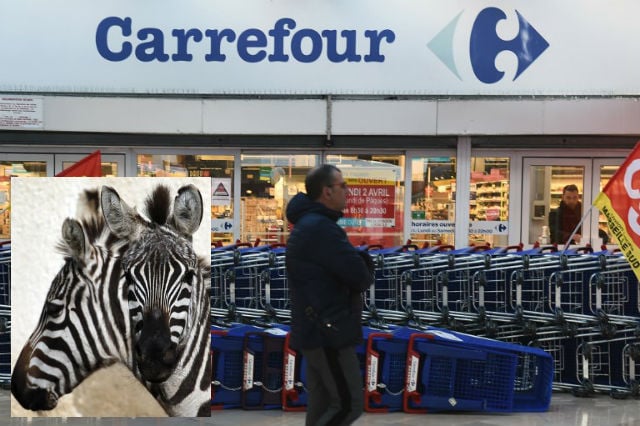 Photos: AFP
An animal rights organisation has condemned several of France's largest supermarket chains for selling 'exotic' meats including zebra but also ostrich, kangaroo and bison dishes over the festive season.
A study by animal rights charity 30 million d'amis identified supermarkets Carrefour, Auchan, Intermarché, Houra and Cora as selling or having sold meat in store or online from some of these animals under brands including Damien de Jong, Maître Jacques or Saveurs forestières, which offers zebra steaks marinaded in honey.
Selling this meat isn't illegal but the organisation said it was outrageous that supermarkets were selling the meat of animals such as the zebra which are an endangered species.
The zebra meat sold in French comes from South African farms which are completely legal. But in the wild, a quarter of the common zebra population has disappeared over the last 25 years, and in some countries, they are only found in nature reserves.

“At a time when the world's biodiversity is collapsing, selling meat from a species that is threatened with extinction is perplexing,” the organisation said. “It sends a very bad signal to the consumers and gives the impression – which is completely false – that wild zebra populations are robust.”
People have also been voicing their outrage on social media.
“Hello @CarrefourFrance, For 2019, could you also make panda steaks? Thanks for having zebra steaks on your shelves because there are fewer and fewer in the wild,” the comedian Rémi Gaillard commented sarcastically on Twitter.

The French don't eat much 'exotic meat', such as those which sparked the controversy, consuming it on average once a year and less than 300 grams per person annually against 86 kg on average of 'normal' meat.