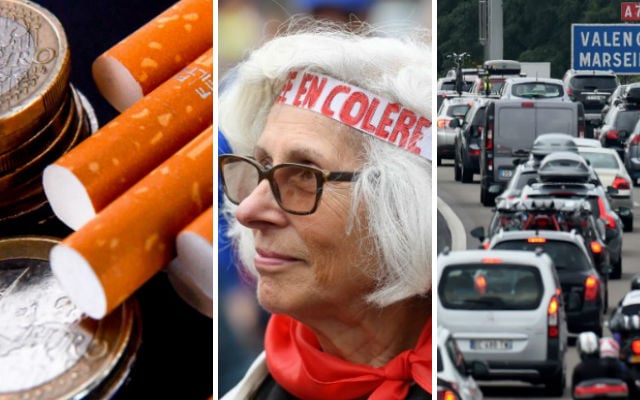 Photos: AFP
Here are the main ones you need to know about.
Minimum wage
From January 1st, France's minimum wage or Smic as it's called in French, is set to increase by 1.5 percent.
That means that anyone earning the minimum wage will be earning €10.03 euros on 1 January 2019 instead of €9.88 — the value of the minimum wage since January 1st 2018.
This equates to €1,521.22 per month on the basis of the legal working week of 35 hours. Photo: AFP
CSG “social charges”
The French government announced in December that from 2019 pensioners receiving less than  €2,000 per month will be exempt from the rise in the cost of the CSG “social charges” that came into effect in 2018.
The move came about as a result of demands made by the “yellow vests” and means that retirees that fall into the right pay bracket will pay the previous rate of 6.6 percent compared to the 8.3 percent which they paid after the increase.
While the exemption won't come into effect officially until the second half of the year, the pensioners concerned will receive a back payment to cover the first six months of the year.
But it isn't all good news for retirees…
READ ALSO: Photo: AFP
Pensions
Pensions are set to go up by just 0.3 percent from January, well below inflation which sits at around 1.8 percent.
However the government has increased the solidarity allowance for the elderly by €35 per month, bringing it up to €826.20.
Taxe d'habitation
The government's plan to phase out the residence tax called the taxe d'habitation saw many households in France better off in 2018.
And in 2019, the measure should be even more noticeable, with a further 30 percent drop before it is completely abolished in 2020. Photo: AFP
Overtime
From January 1st 2019, the money earned by working overtime will be exempt from tax.
This move, which was initially set to take effect from September 2019, has been moved forward.
All employees, including civil servants, will benefit from this scheme.
Income tax
The French government is pushing ahead with the long-planned reform to deduct income tax directly from workers' paychecks on a monthly basis from January 2019.
READ HERE to find out what the landmark change means for you. Photo: AFP
Gas prices
Gas prices will fall on average by 1.9 percent on January 1st.
The drop will be 0.6 percent for those who use gas for cooking, 1.2 percent for those who use gas for cooking and heating water and 2 percent for homes which are also heated by gas.
This drop, is the second consecutive drop after the 2.4 percent decline in December, and can be explained by the decline in gas prices on the wholesale market.
These two months of price drops come after a period of steep price increases (+ 5.8 percent in November, + 3.25 percent in October, + 0.9 percent in September). Electricity rates
But the bad news is that electricity prices are set to rise in 2019, according to Le Parisien, and possibly by more than 2.3 percent.
Uninsured drivers
If you're one of the hundreds of thousands of uninsured motorists in France, beware.
From January 1st, the French police will have access to files that make it easier for them to detect uninsured vehicles on the road.
Motorists driving without insurance face fines of up to €3,750 which can be accompanied by additional penalties such as the suspension or cancellation of a license and even the confiscation of the vehicle. Cigarettes
There's some bad news for smokers in 2019.
After the two price hikes seen in 2018, two more are scheduled for April and November next year, with prices going up 50 centimes each time.
That means that the average price of a packet of cigarettes will be around €9 at the end of 2019.
Salaries
Salaries should continue to rise in France next year, according to a study by Deloitte.
The report reveals that companies expect earnings to rise between 1.5 percent and 2.5 percent in 2019 as part of annual wage negotiations.
Stamp prices
From January 1st the price of stamps is set to rise, with rates increasing by about 10 percent.