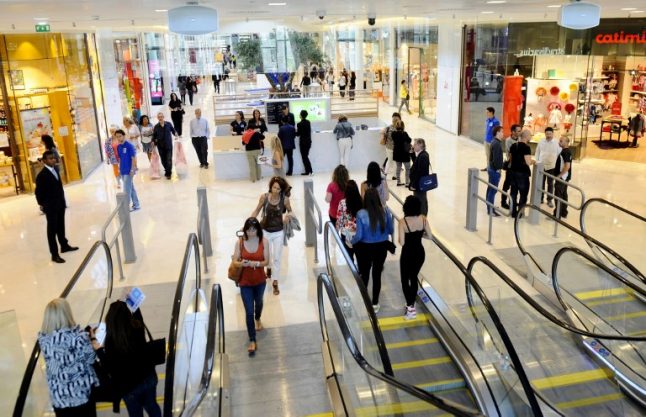 People walk in the new "Les Terrasses du Port" (Terraces of the Port) shopping centre in Marseille. Photo: AFP
According to a report by France's national statistics agency INSEE, spending power in France increased by an average of 1.4 percent in 2018.
While multiple taxes and a rise in the cost of fuel, which sparked the “yellow vest” protests, were among the factors making 2018 a more expensive year for the French, there was also an overall wage increase which helped to ease the hit, the report revealed.
INSEE also said that spending power should jump by another 2 percent in the first quarter of 2019.
Here's a look at the factors that affected your wallet in France 2018. Photo: AFP
CSG “social charge” rise
In 2018, the government increased the CSG – a levy deducted from salaries that goes towards paying for France's social security system, by 1.7 percentage points.
The rise was introduced in two stages, first in January and then in October.
Some reports suggest that the much-criticized measure has had the greatest negative impact on the purchasing power of the French during 2018, particularly on retirees.
Some 60 percent of pensioners lost out in 2018, with the 1.7 percentage point hike in the CSG social charge coming out of their pensions. Only those with an income of less than €1,289 a month were be exempt. All the others will be paying around €25 more a month.
However not everyone has suffered from the increase.
While private sector workers saw the CSG “social charge” increase on their payslip, it was outweighed by the gain they receive in the cutting of the other contributions (for illness and unemployment).
This resulted in private sector employees seeing their net salary rise, with an average salary increase of 250 euros over the year for those on minimum wage working in the private sector.
A large number of people who are self-employed in France also benefited from the drop in contributions. A protester bears a headband reading “angry” as pensioners demonstrated in Paris in 2017 against the increase of the CSG. Photo: AFP
Phasing out the taxe d'habitation
The government's plan to phase out the residence tax called the taxe d'habitation saw many households in France better off in 2018.
Next year some 80 percent of France's 17 million households will see the tax, which roughly depends on the size of the house or flat you live in and where you live, reduced by 30 percent.
Those that benefit from the saving will be single-households where the individual earns less than €27,000 a year, couples who earn less than €43,000 a year and a couple with children earning less than €49,000 a year.
The tax will be phased out completely for many lower income earners over the coming years.
However unfortunately the report by INSEE showed that the drop has not had the desired effect on spending power due to the fact that the drop in a tax paid just once a year is not as effective as increasing people's net income over the year. Photo: AFP
Cigarettes and fuel
The rising costs of everyday products, such as cigarettes and particularly fuel have been at the heart of the debate on purchasing power in France in 2018.
While the French government has cancelled the tax on the price of fuel which was set to come into force in 2019 as part of a string of concessions after the “yellow vest” protests, fuel prices are still higher than this time last year.
As of January 1st fuel taxes increased by 7.6 cents per litre of diesel and 3.9 cents per litre of gasoline in France and these are increases that some “yellow vests” would still like to see removed.
The increase in tobacco taxes has also been controversial.
In March and July 2018, the government introduced price hikes which pushed up the average price of a pack of cigarettes by one euro in just a few months.
Today, prices range between 7.60 and 9.30 euros per pack, compared to 6.70 euros to 8.10 euros a year ago.
Finally, while electricity costs have remained relatively stable, the price of gas in the home has risen by almost 20 percent. Photo: Lara Cores/Flickr
Wages go up faster than inflation
The really good news for people's pockets this year in France was that in general wages increased faster than inflation, suggesting that the economic recovery which has been witnessed over the past two years is starting to pay off.
This year, salaries rose by 2.5 percent for executives – as in 2017, and 2.2 percent for non-executives – up slightly, according to an annual study by Deloitte.
Meanwhile inflation was recorded at 1.9 percent for the previous year in November.