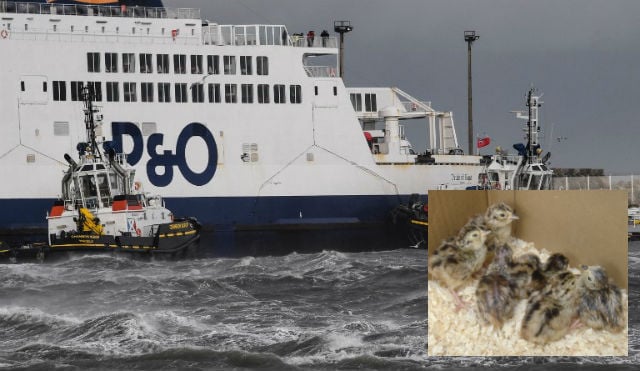 Photo: AFP/CiaranG at Wikicommons
P&O stopped accepting the shipments last June after Britain's League Against Cruel Sports published a video decrying the fate of the baby pheasants
and partridges.
Brittany Ferries and Denmark's DFDS were among the other operators to stop transporting the chicks.
Claiming to be victims of discrimination two major French producers of both chicks and eggs, Gibovendee and Envol de Retz, sued the three shipping companies in separate courts.
A court in the French fishing port of Boulogne-sur-Mer heard their complaint against P&O.
“We don't deny that much of our production is sent to farmers who raise them as game for hunting parties. But our business is perfectly legal,” Gibovendee's CEO Denis Bourasseau told the court, adding that exports to Britain had previously accounted for roughly 45 percent of his sales.
“If we lose all our transporters one after the other, we're destined for bankruptcy,” the plaintiffs' lawyer Alexandre Varaut warned.
But the court sided with P&O, which argued that it had the right to limit the transport of live animals and to take measures to protect its reputation.
In a short statement it said it found no evidence of discrimination, without giving details.