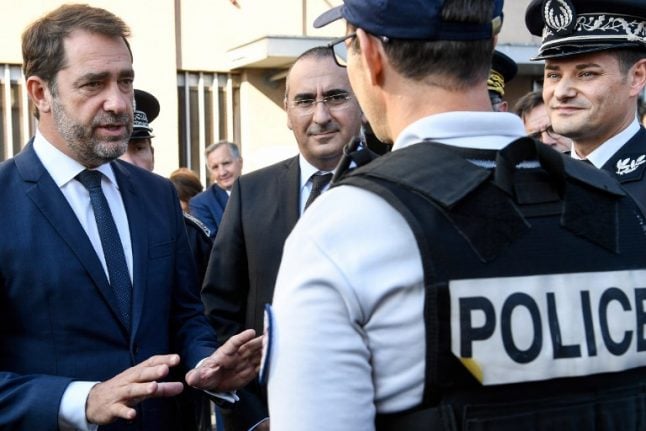 Photo: AFP
After several hours of negotiations between France's Interior Minister Christophe Castaner and France's three main police unions, an agreement was finally reached regarding officers' salaries.
“We have just signed an agreement with the Minister of the Interior — an agreement on a salary increase for police officers,” Yves Lefebvre, General Secretary of the Unité-SGP police union, told the French press.
“That's what we wanted, we wanted an immediate improvement in purchasing power,” he said. “Today we got what we wanted.”
Jean-Claude Delage from the Alliance union described the agreement as a “significant” step forward.
Police have long complained of exhausting hours of patrols and chronic under-investment in equipment which have stretched departments to the breaking point and taken a heavy toll on the force. The crisis has only become exacerbated by the month-long yellow vest protests and the high heightened terror alert.
The understanding reached between the government and the police unions will see an average monthly wage increase of €120 for officers who are at the beginning of their careers, which will be introduced between January 1st 2019 and January 1st 2020.
READ ALSO: Photo: AFP
There will also be a wage increase of €120 to €150 for more experienced officers.
Part of the increase — €40 per month — will be acknowledged from January 1st 2019 and the rest will be gradually introduced, said Castaner and Secretary of State, Laurent Nuñez on Wednesday.
The interior minister has also promised to pay the €275 million that the French state owes the police in unpaid overtime.
Police officers in France are reportedly owed a total of 23 million hours in overtime. The figure is for extra hours worked over decades but it has ballooned in recent weeks due to the “yellow vest” protests.
The payment terms will be determined according to a multi-year plan, according to reports.
The negotiations came after a day of protest which saw police officers respond to calls from unions to “do the minimum”, meaning only respond to emergencies, as well as block the entrances of local police stations (commissariats).
The negotiations began in a meeting on Tuesday evening but they failed to find a solution to quell the anger.
As a result of the salary increase the €300 bonus initially proposed as a way of compensating police officers after the extra work they put in over the “yellow vest” protests will now only be given to technical, scientific and administrative staff and prefecture employees whose working hours were affected by the demonstrations. Photo: AFP
However not all unions were happy with the agreement.
The Alternative Police union responded by saying: “The police are not for sale!”, arguing that the deal fails to address the deeper concerns of the French police force.
“While purchasing power is a constant concern for police officers… Alternative Police notes that no substantive measure on the alarming situation of the national police has been introduced.”
The union said that serious issues such as the high level of police suicide, which is 36 percent higher than the rest of the population, the lack of work/life balance and the insalubrious working conditions French police have to endure are among those which have not been addressed.
As a result the Alternative Police union said it has “not excluded taking to the streets in mid-January.”

DRIVING
France’s speed camera cars: Where are they and how can you spot them?