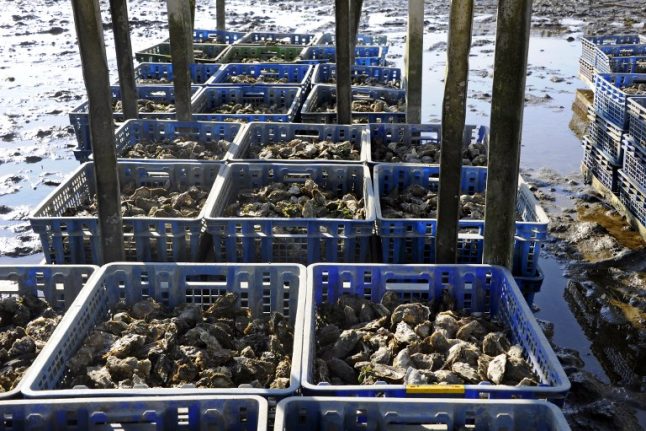 Photo: AFP
Oysters are one of the essential dishes that go into making a French Christmas truly festive and are traditionally eaten as part of the reveillon dinners on Christmas or New Year's Eve.
However there may be some French people who find it harder to get their hands on the country's favourite yuletide shellfish this year.
One of the reasons behind the possible shortage is the hot summer that France experienced this year — labelled the second hottest on record — which has meant that the water was too hot for many oysters to grow properly.
Naturally this is a concern for producers some of whom make 40 percent of their annual turnover during the end of year celebrations, with many of them worrying that climate change will mean a steady decline in the number of oysters that they can sell over the coming years.
Sales of oysters produced in Normandy on the north west coast of France — one of the country's main regions for the shellfish — represent a whopping 100 million euros per year.
But it isn't only the climate that producers have had to contend with this year.
In fact it appears, somewhat surprisingly, that the 'yellow vest' protest movement has had an impact on oyster sales too.
One oyster producer told French radio that the road blocks created by the gilets jaunes in November meant that he made just 40 percent of what he would normally.
“In November, there were between 40 and 50 percent fewer sales than forecast,” Laurent Bidart, who delivers his oysters across France, told French radio.
“And we were practically at the same level in the first week of December. I think that for the farmers who have suffered the bird flu and who now suffer from the 'yellow vests', it will be very hard too.”
It is common for France to be gripped by festive fears that they won't be able to enjoy their traditional delicacies.
Last year there was panic over the danger that a butter shortage could hamper Christmas culinary traditions and there were also worries that the price of foie gras would become to too dear for many people to afford.