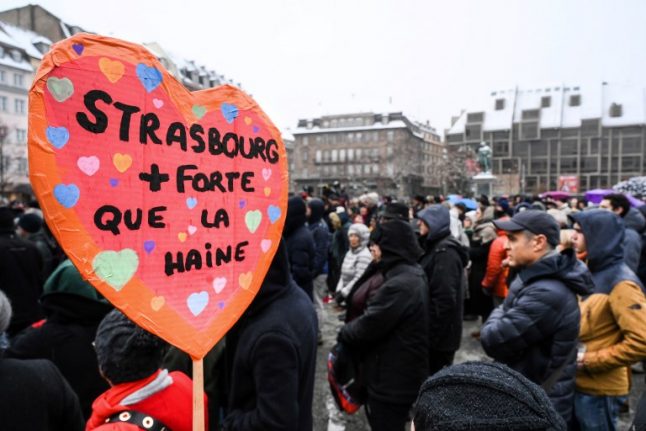 Photo: AFP
The 37-year-old, who was not immediately identified, was ordered to be held in detention on charges of association with a terrorist conspiracy and weapons
possession, the source said.
The man, initially arrested on Thursday, is suspected of helping to provide the pistol made at the end of the 19th century used by Cherif Chekatt, a career criminal who shot dead five people and wounded 11 at the market last Tuesday night.
Chekatt, who was on a list of possible extremist security risks, was shot and killed by police after a two-day manhunt in the city.
The alleged associate appeared before a judge in Paris, the prosecutors' office in the capital said.
READ ALSO: Six other people detained in the wake of Tuesday's attack, including Chekatt's parents and two of his brothers, have been released without charge.
The Islamic State group claimed Chekatt was one of their “fighters”, but this was dismissed by French Interior Minister Christophe Castaner.
Chekatt's father, Abdelkrim, told France 2 television Saturday night that his son believed the Islamic State “fought for a good cause”.
“I always told him they were criminals,” his father added.
Had his son hinted he intended to kill people, “I would have told police about him, so that he wouldn't have killed anyone, and wouldn't have gotten himself killed,” he said.
Four of the five people killed in Tuesday's attack were foreigners or born abroad.
One was a 45-year-old Thai tourist, and another a 45-year-old Franco-Afghan garage owner who fled his country 20 years ago.
A 28-year-old Italian journalist, in town to cover the European parliament, was also shot and killed, as was a 36-year-old former Pole who had lived in Strasbourg for the past 20 years.
The dead also included a 61-year-old Frenchman who had just retired and was shot in the head as he stepped out of a restaurant.