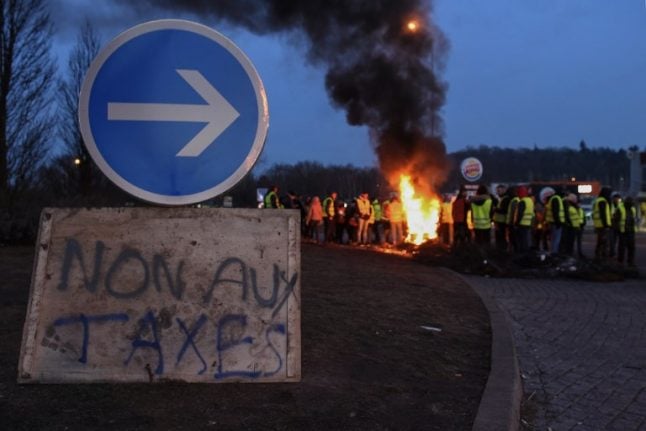 French classical plays, both the comedies and the tragedies, have five acts. Was “Act 5” of the gilets jaune movement on Saturday the muddled conclusion of a French tragedy or the bitter-sweet finale of a French comedy?

Most likely it was the beginning of a confusing new phase – a  phase of splits. There will be negotiations by some gilets jaunes and continuing but diminishing protests by others.

According to the government, 66,000 people demonstrated across France on Saturday. This was half the number of the week before and less than one quarter of the support for “Act 1” of mass gilets jaunes protests on 17 November.

Mercifully, there was no repeat of the widespread violence in Paris of the two previous Saturdays. But there was considerable violence in Bordeaux, Toulouse, Nantes, Saint Etienne and other cities. An armed group of gilets jaunes fired  shots outside the home of a Macron-supporting parliamentarian in upper Normandy. Several factors have checked the movement’s momentum, for now. There was the Islamist terrorist attack in Strasbourg on Tuesday. There were the concessions made by President Emmanuel Macron last Monday. There was the worsening weather. There was exhaustion in the ranks. There was fear of more violence.

The story is certainly not over.

A militant wing of gilets jaunes, represented by a group called La France en Colère (Angry France), is determined to continue the roundabout blockades and street protests. They reject as “crumbs” the Euros 10bn in income supplements for the low-paid offered by Macron last Monday.

They want steep cuts in VAT on food, clothes and other necessities. They are demanding a redrawing of the French constitution to allow laws and politicians to be approved or removed by popular vote. This is a fake good-idea, an invitation to demagoguery not democracy, which has been at the heart of the internet-bred, gilets jaunes movement from the beginning.

A more moderate wing of yellow vests, represented by a group called Gilets Jaunes Libres, is ready to take part in the nationwide consultation on all taxes and spending proposed by President Macron. They are considering putting up candidates in the European election in May and the presidential and parliamentary election in 2022.

An immediate problem arises, however. Macron’s appeasement package was thrown together in a few hours. Like all changes to the kafkaesque French welfare and tax system, it is proving brain-crushingly complex to deliver. The flag-ship Euros 100 “increase” in the Smic (minimum age) from 1 January is NOT an increase in the minimum wage itself. It will be paid by the French tax-payer, in a form still to be decided, with only a few days to decide. An increased government “activity” payment for the low-paid? A cut in their social contributions? A mixture of both?

If that issue can be resolved, France will, perhaps, draw a breath and pass the Christmas and New Year holidays in relative calm.

It would be wrong to dismiss the last month as just another French social protest. Macron’s presidency has been scarred and possibly ruined.

He claimed to be a different kind of French president, capable of resisting rebellion, reforming the nation’s finances and creating new economic opportunities for all. He has failed within 19 months, emulating the failures of his predecessors, François Mitterrand, Jacques Chirac, Nicolas Sarkozy and François Hollande.

Such a long political losing streak explains, in part, the anger which created the yellow vest movement. It strengthens the case of those who claim that France is unreformable – constantly calling for “reform” but always resisting individual “reforms”.

The events of the past month also, unfortunately, strengthen the argument that violence is embedded in French political culture. Many gilets jaunes repudiated the savage violence which exploded during Acts 3 and 4 of the protests on 1 and 8 December. Others took part. Many others secretly welcomed the excesses. Without the violence, Macron would not have ceded as rapidly or as far as he did. Macron, like the gilets jaunes, protesters wants to lever part of the burden of taxation off the French economy. He tried to do so by front-loading tax cuts for business and the rich. Similar breaks for middling and low-income French people were supposed to come later as the economy boomed.

There were a few faint signs that the Macron approach was working. Wages were rising slightly; job opportunities were increasing; youth unemployment was falling.

But he and his inexperienced army of new-minted parliamentarians failed to spot, or act upon, the growing fury of lower-middling and poor people in “Peripheral France”. Macron has now been forced to bring forward the tax and welfare concessions for lower-income people, pushing his budget over the EU 3 pc GDP limit and casting doubt on his entire reform programme.

Comedy or tragedy? There are elements of comedy in the humbling of a brilliant young know-all, whose life, until now,  has been an unbroken chain of audacity and good luck. Tragedy waits in the wings.

The yellow vest movement could transform itself into a new, healthy and democratic force in French life. It could also still skid into something darker and more destructive.