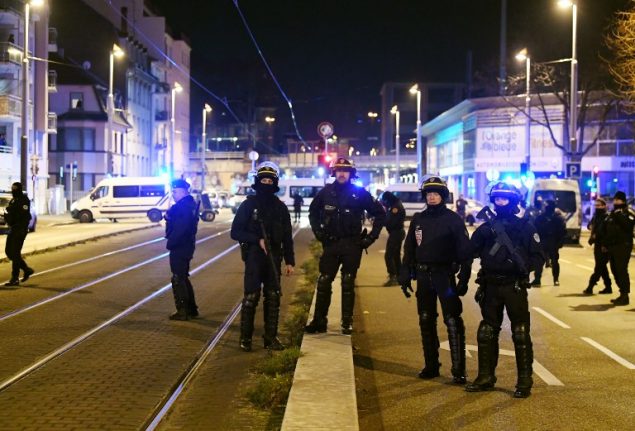 “Police officers: Thanked on Thursday, cobblestones on Saturday,” read the tweet from former French Prime Minister Jean-Pierre Raffarin that was widely shared and liked on Twitter.

Raffarin was referring to the scenes caught on camera (see below) where local residents in Strasbourg applauded police officers and shouted “bravo” after hearing that the fugitive gunman had in the words of authorities been “neutralized” after two days on the run.

The gunman Chekatt was shot dead after opening fire on a team of local police who had recognised the suspect as he wandered the streets in the Neudorf area of town.

Raffarin wasn't the only one to point out the contrast between the appreciation shown for police in Strasbourg and the recent scenes of violence in Paris and other French cities when officers have come under a hail of cobblestones and other missiles by a minority of hardcore yellow vest protesters and extremist “casseurs” (hooligans).

Responding to his tweet one person wrote: “You're right, France has become schizophrenic. Bravo to the police”.

Others responded by pointing out how the police had used tear gas, water cannon and dispersal grenades to respond to the violence.

Both President Emmanuel Macron and Interior Minister Christophe Castaner paid tribute to police in the aftermath of the dramatic end to the tense manhunt.

“Facing the worst, you gave the best. Thank you,” tweeted Castaner. That sentiment appeared to have been echoed by residents who will no doubt feel relieved that the man who brought terror to the city at Christmas time is no longer at large.

The incident echoes the days after the Charlie Hebdo massacre in January 2015 when police, three of whom were killed in the attacks, were widely applauded by members of the public.

On Saturday police will be back on the streets of cities across France with more yellow vest protests set to go ahead. It's unclear how many will turn out or whether they will be marred once again by violence.

French police have warned the government that the protests, which saw 89,000 officers on duty last Saturday including 8,000 in Paris, had left them at breaking point.

Police have also been heavily criticized for certain incidents linked to recent protests notably when scores of high-school pupils were forced to kneel with their hands on their heads.