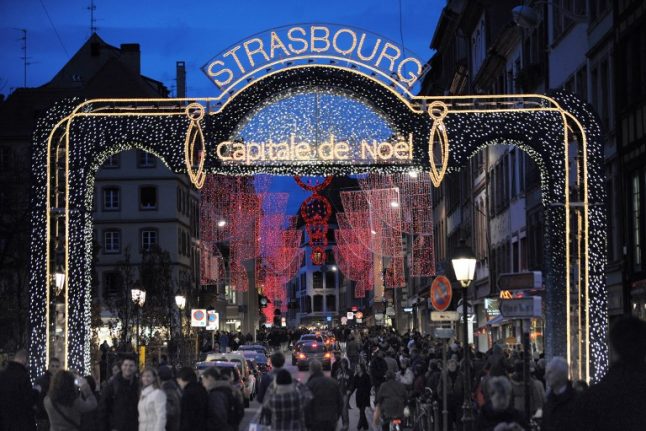 Photo: AFP
Relief has descended on Strasbourg after police shot dead the gunman who open fired and stabbed members of the public near the city's famed Christmas market on Tuesday.
As a sign that locals are keen for life to return to normal the Christmas market will reopen on Friday morning at 11am.
“I've been waiting for this moment for 48 hours, and I'm really relieved as are all the inhabitants of Strasbourg,” the city's mayor Roland Ries told France Inter.
“I have an immense respect for the work carried out by the police forces, even if it lasted 48 hours but the result is there and now, and life can carry on,” he said.
The mayor's deputy Alain Fontenal: “It's an immense relief and the neutralization of the terrorist frees us from ananxiety that weighed heavy on the shoulders of the people of Strasbourg.
“Even if it will be difficult to enjoy the festivities in this context, it's important to get on with life and defend our traditions and culture,” the deputy mayor said.

The authorities made the decision to reopen the Christmas market on Thursday before the 29-year-old terrorist Cherif Chekatt, was shot dead by police in the Neudorf area of the city.
In a sign of how relieved residents in the city are, they applauded police at the cordons set up around the spot where Chekatt was shot dead.
“This is a huge weight that has been taken away. We're going to be able to return to normal and our great Christmas market,” an unnamed inhabitant of Strasbourg told LCI television.
The fact he is loner on the run will reduce tension around the reopening of France's most famous festive market.
“I am very happy that we were able to make that decision and that it was made easier by the death of this terrorist,” French Interior minister Christophe Castaner said late Thursday in Strasbourg.

Later on in the day, the interior minister is expected to take a stroll through the market, where security measures have been beefed up.
The number of entrances to the market has been reduced from 19 to 15 and police forces will back up the private security agents controlling the entrance and exit points.  The market will also close earlier at 8pm every evening including weekends.
Extra police forces have also been deployed around the Grand-Ile, where the market is situated.
Three people died after the shooting at the Christmas market and several more were seriously wounded.
Strasbourg's Christmas market is one of France's major tourist attraction in the Christmas season, attracting 2 million people every year, despite fears it could be a target for a terrorist attack. In 2000, police foiled an attack planned by a group of men linked to al-Qaida to set of a pressure cooker filled with explosives in the market.
But the city and its residents may find it takes a while before life really returns to normal and the fear subsides. Police investigations are ongoing and anti-terrorist officers must try to determine whether Chekatt acted alone or whether he had the support of any like-minded accomplices.
“This is a first for Strasbourg, it's really a peaceful city,” said medical student Antoine.
“It's hard to imagine what comes next, because we've never been through something like this.”

“This is a huge weight that has been taken away. We're going to be able to return to normal and our great Christmas market,” an inhabitant of Strasbourg told LCI television.