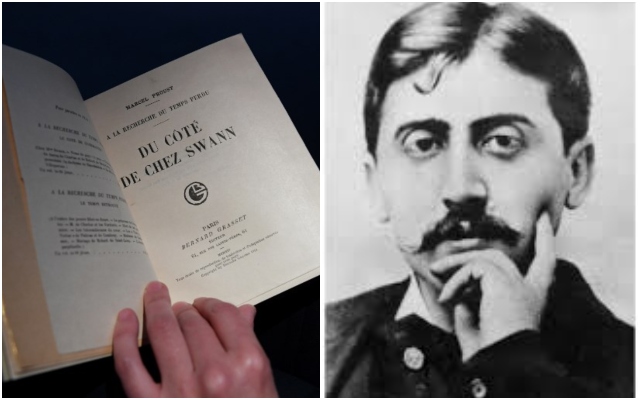 The rare copy of the first volume of the French writer's masterpiece, “Remembrance of Things Past”, had been expected to go for between 600,000 and 800,000 euros.

It smashed the previous record for a piece of French literature held by the poet Charles Baudelaire's “Les Fleurs du mal” (“The Flowers of Evil”), a copy of which sold for 775,000 euros nine years ago.

The copy of “Swann's Way” is the very first from a numbered luxuriously bound edition of the novel that Proust paid for himself and gave to his friend Lucien Daudet.

The novel includes the famous “madeleine moment”, when the taste of a little almond cake dipped in tea sets off a flood of nostalgic memories for the book's narrator.

It was the star lot in the fourth part of the mammoth sale of the library of the late French fashion mogul Pierre Berge.

The co-founder of the Yves Saint Laurent fashion empire put together one of the world's greatest private collections of rare and antiquarian books. They are being sold off in a series of high-profile auctions which began last year and are set to continue in 2019.

Friday's sale, which included a treasury of classic works from the Renaissance, hit a final tally of more than 8.1 million euros, double the estimate.

Bidding was fierce on an illustrated version of Plutarch's “Lives of the Noble Greeks and Romans” from 1508, and a 1580 edition of French philosopher Michel de Montaigne's “Essays” went for 682,000 euros.

A 16th-century botanical work by the Swiss naturalist Leonhart Fuchs sold for 425,000 euros.

“Berge was interested in a thousand things obviously literature was his main passion — but also mythology, botany, gardens and politics,” Forgeot said.

Revolutionary tomes by Karl Marx and the Russian anarchist Mikhail Bakunin also went under the hammer, with a proof of Marx's “Das Kapital” which includes the communist thinker's corrections making 164,288 euros, more than twice the predicted price.

Berge, who set up the Yves Saint Laurent fashion house with the eponymous designer, his longtime lover, was a supporter of left-wing causes and gay rights.

He died in September 2017 after making sure that his and Saint Laurent's fortune would go to their philanthropic foundation.

The vast art collection the couple put together was sold off in what was dubbed “the sale of the century” in 2009 for 340 million euros ($409 million at the time).