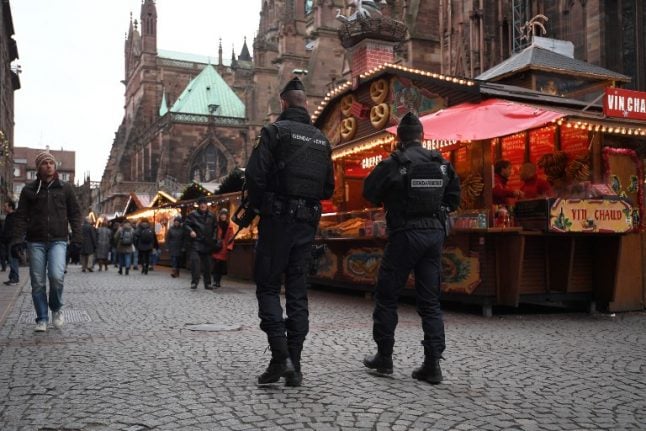 Photo: Patrick Hertzog, AFP
Since the attacks, claims that the city and the Bas-Rhin department has more individuals known as 'fiche S' – essentially a French watchlist of people who represent a potential threat to national security, often just referred to as a terror watchlist – than the national average have been all over the French media.
The claims seem to come from the mayor of the city Roland Ries.
“It's true that we have statistically more 'fichés S' here in Strasbourg and in the Bas-Rhin department than the national average”, the mayor of Strasbourg Roland Ries told France Inter on Friday when discussing why Strasbourg was the target of the latest terror attack to hit France.
A figure quoted several times by the city's mayor after the attack and in the media spoke of 10% of France's 'fiche S' criminals being found in Strasbourg and the Bas-Rhin department.
Another reason why there has been a focus on Islamist extremists around the eastern region is that individuals from the Bas-Rhin department have made headlines in recent years for either travelling in groups  to Syria to fight Jihad or playing a role in previous terror attacks in the country such as the attack on the Bataclan and this year's knife attack in the Opera area of Paris.
The claims were used to suggest the city that borders Germany and its surrounding area was a breeding ground for potential jihadists.
But a closer look at statistics appears to show this isn't quite the case.
There are 26,000 individuals on the 'Fiche S' list in France.
Those included the 29-year-old gunman Cherif Chekatt who fired the crowd in the Strasbourg Christmas market and then hid in the city before being shot dead by police in the Neudorf district on Thursday. Many others who have carried out terror attacks in France in recent years have also been on the Fiche S list.
Some of the individuals listed are radicalised like Chekatt was, but not all. The list also includes hooligans, anarchists and other people deemed to be a danger to national security.
French authorities don't release the figures for the number of 'fiche S' criminals for specific parts of France, so it is impossible to know whether or not there are more in the Bas-Rhin.
READ ALSO:
Strasbourg breathes sigh of relief and hopes to get on with Christmas However, since 2015, radicalised individuals have also been added to another watchlist called FSPRT, which has roughly 18,000 people on it. Chekatt was down on both lists.
This is probably where the confusion began.
The Bas-Rhin counts 224 people on the FSPRT watchlist, 110 of whom live in Strasbourg. While those figures are higher than the greater region of the Grand Est that encompasses Strasbourg and the Bas-Rhin, they are in fact lower than the national average.
“If you compare those figures nationally, they are 15.6 for 100 000 inhabitants and 13.2 for the inhabitants of the Bas-Rhin,” Le Parisien reported.
The highest concentration of people on those lists is mostly found in the departments containing France's biggest cities.
So it seems that Strasbourg and the area around it doesn't house more dangerous or radicalised Islamist extremists than other parts of France, despite what the city's mayor has claimed.