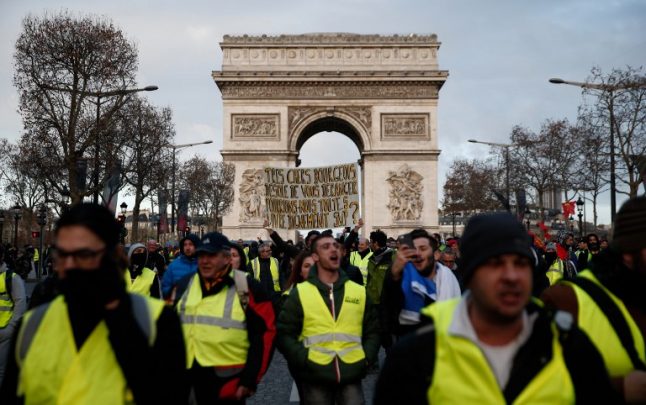 Photo: Abdul Abeissa, AFP
The Yellow Vests are planning more protests in Paris and nationwide Saturday despite the French government urging them to refrain from holding another round of demonstrations after the terror attack at a Christmas market in Strasbourg.
“We need to amplify the movement more than ever and we need the maximum number of yellow vests to protest. We are fully  behind the Strasbourg victims and we are also completely determined to keep going,” the Gilets Jaunes wrote on Facebook.
One of the leading figures of the movement Priscillia Ludosky laid out the demands that she wants the government to meet before the protests will end.
“We Gilet Jaunes demand a real cut in all taxes on essential things such as energy, housing, clothing and food as well as a significant drop in private incomes, salaries and the privileges of high-ranking civil service officials,” she said.
“It's really sad for Strasbourg, but the Yellow Vests must go on Saturday, it just makes things too easy for the president otherwise,” one person commented on the Facebook page.
“Yes, let's continue the movement as what happened in Strasbourg is an isolated shooting and not a terrorist attack,” said another. “It's pathetic for the government to use this situation to put the country on a high security alert to ban demonstrations. Having soldiers patrolling our towns will have dire economic consequence for the start of 2019.”
Not all yellow vests are calling on the protests to go ahead with some urging people to turn to dialogue with local officials while others have suggested protests should take place outside towns.
As of Thursday, the government has not banned the upcoming demonstrations in Paris, but government spokesman Benjamin Griveaux called on the protesters to be “reasonable” after President Emmanuel
Macron offered a range of financial relief last Monday, including a minimum wage boost and a tax cut for low-income pensioners.
READ ALSO: 'Well played Macron': Yellow vest Facebook pages flood with Strasbourg terror conspiracies “Our security forces have been deployed extensively these past few weeks,”  Griveaux said, while insisting that “it's not up to us to say if the movement should be called off or not,” Griveaux told CNews television.
In the wake of the Strasbourg attack, “it would be better if everyone could go about their business calmly on Saturday, before the year-end celebrations with their families, instead of demonstrating and putting our security forces
to work once again,” he said.
The “yellow vest” protests began on November 17 over fuel tax increases but quickly evolved into a widespread revolt over declining living standards as well as Macron's perceived indifference to the problems of ordinary citizens.
Even before Monday's concessions the government had scrapped a fuel tax hike slated for January, a core demand of the protesters, who mainly live in rural areas and smaller towns and rely heavily on their cars.
Along with road barricades in many parts of the country, protesters have converged on Paris every Saturday since November 17, sparking clashes with police and intense vandalism which have shocked the country.
Last Saturday nearly 90,000 police were mobilised across the country for the protests, with 8,000 officers and a dozen armoured vehicles deployed in the capital where scores of stores, museums and monuments were closed.
But protesters still smashed windows, looted stores and burned dozens of cars in many parts of the city.
While some of the movement's representatives have said they are open to halting the protests to negotiate with the government, others have said its concessions are not enough, and have vowed to protest again in Paris this weekend.