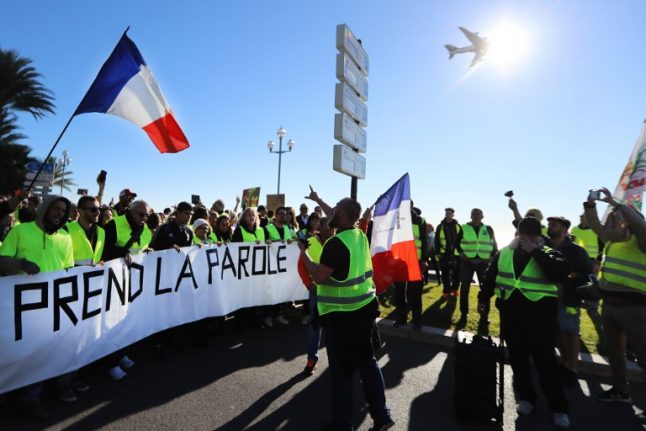 The number of protesters who turn out could determine the fate of the movement, five days after Macron announced a series of tax and wage concessions in a bid to end the unrest.

The last three Saturdays have been marked by violent demonstrations, with barricades being set on fire on the Champs-Elysees.

Until now, however, the nation-wide grassroots movement has been backed by a majority of French people, but two polls published on Tuesday – in the wake of Macron’s concessions – found the country was now split broadly 50-50 on whether protests should continue.

Demonstrations started on November 17 in opposition to hikes in fuel taxes, but have since snowballed into a broader opposition to Macron’s pro-business agenda and style of government.

Images of road blocks, massive traffic jams and mobs rioting on the streets of Paris have dented France’s image, as well as Macron’s hopes of forcing through more business-friendly reforms. Many of the movement’s figureheads, along with leaders of the far-left Unbowed France party, have urged protesters to turn out, particularly in Paris, to pressure the government into making further concessions.

Others have suggested that the mostly small town and rural protesters should show resolve by rallying in the regions rather than heading for the capital where large numbers of security forces are being deployed in the expectation of violence fomented by many far-right and far-left agitators.

France “needs calm, order and to go back to its normal functioning,” Macron said Friday. But he refrained from directly calling for protesters to stay at home.

Speaking in the wake of a terrorist attack Tuesday in the eastern city of Strasbourg, which left four dead and 12 wounded, Interior minister Christophe Castaner criticised “yellow vests” who clashed with police in southern France Thursday night at a time when hundreds of security forces were involved in tracking the fugitive killer who was later shot dead.

“I find it inadmissable that today we are applauding our police and then tomorrow some people think it’s ok to go and throw stones at them,” Castaner said Friday morning, referring to how people in Strasbourg clapped to thank the police after news of the suspect’s death.

In a bid to end the protests, Macron has cancelled the planned fuel tax hikes and offered a rise in the minimum wage, tax relief for pensioners and tax-free overtime for workers in 2019. The total package has been estimated by economists to cost up to 15 billion euros ($17 billion), which is expected to be financed mostly by government borrowing.

But some protesters think they should capitalise on the concessions.

“What Macron did on Monday, was a call to carry on because he has started to give ground, which is unusual for him,” a senior figure in the “yellow vest” movement, Eric Drouet, said in a video posted on Facebook.

Around 8,000 police will be on duty in Paris on Saturday, the same number as last weekend, backed up by 14 armoured vehicles, water cannon and horses.

Around 90,000 security forces were mobilised last Saturday across France and 2,000 people detained, around half of them in Paris.

Six people have died in the protests – most as a result of traffic-related accidents – and hundreds have been injured.